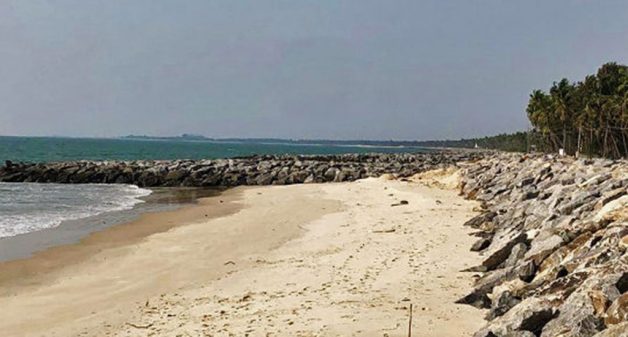 As Mangalore resident Spandana walked on to Padukere beach in the first week of April, a sign board restricting the entry of anyone connected with the marina project welcomed her. This white-sand beach was a favorite spot from her childhood, as she grew up in Udupi, which is only a 30-minute drive from Padukere.

Curious, she tried to find out more. “The villagers there are not willing to have a conversation with anyone. They are suspicious of everyone and even tried to take pictures of my car number plate,” she said. The plans for a marina to come up in this part of Karnataka have been in the offing for a couple of years. And for many months now, this beach has been a site of many protests.

Discussions regarding developing the beach in order to increase tourism and employment opportunities began in 2018. According to reports, the proposed marina at Padukere, Malpe could be constructed in an area of 3.69 km with the help of breakwaters (an offshore structure such as a wall protecting the harbor or beach from the force of waves) extending 1.66 to 2 km into the sea.

It is proposed to cover a large area between Shanthinagar and Mattu Koplu. The marina will not be for berthing large cruise ships – only for yachts and sailboats. Publications report that the proposed cost of this project is Rs 800 crores.

“With India’s only functional marina currently in Kochi, there are fewer intermediate berthing facilities for the 4,000-plus boats travelling between the Arabian sea and south Asian countries,” said G. Jagadeesh, deputy commissioner of Udupi. The government sees this as an opportunity to increase tourism, especially international tourism, in turn increasing employment.

The many small, natural islands in this region make it even more suitable for the parking of various yachts and boats. Because there’s no other marina of international standards in India, the one at Padukere, to be implemented by the Coastal Development Authority, is planned to be a state-of-the-art one.

The government is trying its best to assure people that the project will not be taken ahead if it is harmful to the environment and the construction of the marina will be done without flouting environmental norms, informed Jagadeesh. Restaurants, clubs, gazebos, and a promenade are proposed for attracting international tourists.

So, why are the villagers against a marina that would turn Padukere beach into a rich man’s paradise? As fishing communities, their biggest concern is the possible impact on their livelihoods. A fisherman, Krishna Suvarna, president of the Malpe Fishermen’s Association said, “We fishers only oppose that which is likely to harm our fishing.”

A lot of fisherfolk in the Malpe area use a fishing technique that involves casting a net close to the shore. The presence of a marina with its small boats, accompanied by their sounds and movements, is bound to disturb the natural habitat of the shallow-water fish. They will retreat further out in the seas, making it difficult for the fishers to fish for them.

A fishing community leader, Rama Kanchan said, “We are not against development, but we are against anything that has the potential of harming the region and our lives.” The aspects which the government sees as tourism and economy-boosting are precisely the ones the villagers dread.

The villagers do not want their culture and social activities to change or be destroyed on account of a marina. Yet another fisherman said they fear that, because of such projects, they might be forced to leave their hometowns, the land of their forefathers.

There are several research papers that highlight the impact of anthropogenic modifications to waterways, on the existing quality of seas, biodiversity, and quality of water, air, and the environment as a whole. Besides loss of livelihoods, a marina will hugely affect aquatic species, even resulting in the danger of extinction of some of the endemic species, said a marine researcher who did not wish to be named.

According to research done by the Central Marine Fisheries Research Institute (CMFRI), this region boasts of 28 types of phytoplanktons, 28 species of seaweed, 25 types of sea anemones, 390 species of fish, and 234 molluscan species.

A marina, which is a dock or a basin, not only provides a berthing facility for yachts, but it also provides facilities such as fuel, water, electricity, and sewage pump-outs for boats. Globally, the increase in recreational boating has resulted in an increased demand for marinas or mooring spots.

The construction of the breakwater as well as other parts of the marina causes a big reduction in the aquatic vegetation which actually forms the food for the young fish. A fluctuation in the quantities of small, shallow-water fish, as well as in the salinity and other water conditions, results in less food for certain avifaunal bird species.

Marine biologist, Lavina, a former researcher at the National Centre for Biological Sciences (NCBS), said, “Malpe is a region that is rich in mangroves; it has huge mangrove forests. The construction of a marina or a port will definitely harm the mangroves and, in turn, the breeding grounds of fish and shrimp.”

With concern in her voice, she also talked about the possible impact on dolphins. “Boats in the water result in a lot of movement and sound pollution – they end up disrupting the communication system of dolphins. It ends up disturbing their regular behavior.”

While the marina is still in the proposal stage, the Central Water and Power Research Station (CWPRS), Pune has agreed to conduct a feasibility report to take the project forward.

The effects a marina has on the environment is usually not visible immediately; it could take a long time for the damage to show up. The locals of the area are afraid that in addition to the damage to the ecology and biodiversity of the region, the government’s assurances are only to placate them for now.

Later, it is possible that the villagers themselves won’t be allowed access to their beaches. In the light of multiple coastal infrastructure projects, such as those in Goa, Mumbai and Kolkata being planned across the country, this is an important conversation to have.

Rashi Goel is a journalist based at Goa. Views are personal.

Rashi is a Goa-based independent writer who writes about climate change, sustainability and social entrepreneurship. She also consults with NGOs and social enterprises in the environmental space.