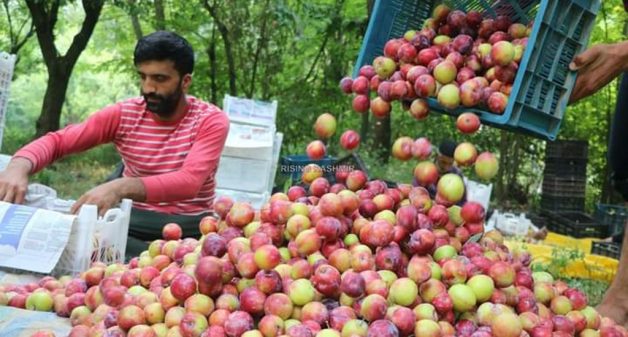 As the harvest season of glossy, red cherries is over, orchards in the Kashmir Valley are ready with their next fruit offering – a fruit comparatively bigger and darker, the red plum. The fruit is known for a mixed tinge of sweet and sour tastes.

Recalling the recent past, Ghulam Mohammad, a 63-year-old plum farmer in Budgam district said, “While the other farmers in Kashmir were switching from paddy cultivation to apple farming, I decided to try growing plum trees.”

Shifting from the tradition of paddy cultivation, Mohammad reworked his two-acre farm situated in Karewas of Budgam district in central Kashmir, and planted a mixed crop of almonds and plums. Now about a decade later, his orchard produces tons of plums that are worth lakhs of rupees.

This year too, the trees in Mohammad’s orchards as well as those in the area are laden with ripe plums. Though production of the valley’s cash crop is at full boom, the growers of the fruit are not happy. They are dismayed about the low returns.

Kashmir produces a large quantity of plums every year. According to the Department of Horticulture, on an average, Kashmir produced almost 8,000 tons of the fruit in the last three seasons. Kashmir Valley has about 1,500 hectares of land under plum cultivation. Of the entire plum acreage in the valley, central Kashmir’s Budgam district has the distinction of being the largest producer of the stone fruit.

Kashmir produces 7,710 tons and Jammu produces 4,150, as per the 2018-19 data available with the Directorate of Horticulture, Kashmir. Of the total production of 11,860 tons, Budgam produces 2,719 tons, highest among the districts, followed by Ganderbal.

According to Ajaz Ahmad, a horticulture officer from Srinagar, the topography of the area is conducive for growing plum. Since plum cultivation does not need much water, it is the most suitable for Karewas region. The area under plum cultivation has been seeing a gradual increase over the years, according to Ahmad.

“I decided to grow plums, as it is among the only few fruits that grow well in Karewas,” said Ghulam Mohammad. Showing the ripe plums in his hand, he said he had been happy. However, for the past few seasons, amidst rising costs, the unchanged price for the yield is a big setback, he said.

Reyaz Ahmad, a science graduate from the University of Kashmir and the owner of a plum orchard in Pulwama district in south Kashmir voices the same concern. He has been looking after his ancestral orchard for the last seven years.

“Usually there is a good production of plums every season. But the returns for the crop are very low compared to the market for other fruits,” said Reyaz Ahmad. “From fungicides to other chemical sprays to labor and transportation, the costs have increased manifold; but the price for the produce has remained almost constant.”

“A large box of plums weighing around five kilograms is sold at Rs 200 to 250, while a smaller box of two kilograms fetches us around Rs 100 to 120 from wholesale fruit market,” said Reyaz Ahmad. He said that the selling price has remained the same for four years and no grower can benefit from the crop at these returns.

The pandemic has added to the worries of the plum producers. Most of the plums grown in the valley go to the local markets. Amidst the mobility concerns and lack of tourism activities for the last two seasons, plum growers see a meager or negligible profit.

“It is for the second consecutive year that there is a low demand for the fruit. There is an evident drop in the market for plums,” said Tariq Ahmad, a fruit grower and a commission agent of Parimpora fruit mandi, Srinagar. “This year, most of the plum went to the local markets within the valley but at cost price.”

As the fruit keeps ripening even after it is harvested, long-distance transportation gets difficult. However, Tariq Ahmad said that the fruit has a great potential. “It can fetch good returns if taken to unexplored markets of the country and abroad. Then its market value will definitely surge,” he said.

There are two aspects to this issue, according to Fayaz Ahmad Malik, President, Fruit Growers Association, Sopore. “Firstly, we need a swift and affordable non-stop means of transportation to carry the perishable fruit to the markets. Having a dedicated train service is a viable option,” he said.

“Secondly, the packaging of these kind of fruits needs some innovation. Cardboard and wooden boxes used traditionally for packing fruits are not feasible for transporting easily perishable fruits over longer distances,” said Malik.

If the market access is well conceived, plums can be a real economic cushion for the growers, according to Malik. With the pandemic still unabated, the growers are reluctantly packing their produce for the local markets, hoping that the government would intervene and make their crop economically viable.

Nasir Yousufi is a Kashmir-based journalist. Views are personal.