To stop wild animals from attacking their crops, villagers of Uttarakhand are ensuring more fruit trees and plants are available to the animals within the forest 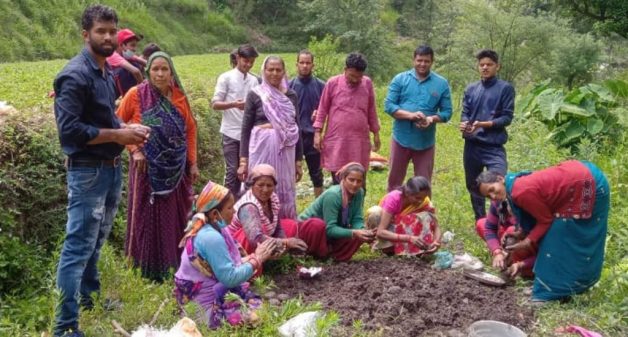 With the hope of preventing crop raids by wild animals, villagers are making seed balls for the forest (Photo by Dwarka Prasad Semwal)

The farms in the hilly villages of Uttarakhand have been under regular attacks from wild animals over the last few years. These constant attacks have left people dead, cattle injured, crops and buildings damaged and farmlands barren.

The technique of seed bombing has been mooted as a solution to this problem. Seed bombs, or balls of seed covered in soil, are being thrown in the forests to ensure food for wild animals in the forest, thus negating the need for them to attack the farms.

Since 2017, when the seed bombing initiative began, the number of hectares of crops damaged has been dropping (though it rose again last year). Similarly, the number of injuries to humans, cattle and buildings have been fluctuating. So while the data suggests the results of the campaign are inconclusive still, it has continued to receive support from the community, civil society and government.

NGOs like the Reliance Foundation have also embraced the campaign. Kamlesh Gururani, project head of Reliance Foundation said, “For the last three years, we have been throwing seeds in the forests of Uttarkashi which appear to have grown. In the next few years, we will be able to come to a conclusion on whether this method is effective or not.”

“This year we have decided to scatter the seed bombs in specific places. Then we can monitor them. We will also assess whether there has been any marginal increase in farmers’ crop yield. But to restrict the wildlife to the forest, we have to make arrangements for water along with food. Chalkhals have also been made at some places for this,” he said.

Explaining the idea behind the campaign, Semwal said, “We planted seeds in the forest in 2017 but most of the seeds were lost, eaten by birds and trampled by animals. We did not even achieve 1% success. To protect the seed, we made a ball of soil, manure and water and put two seeds in it. We named them beej (seed) bombs. We started on a small scale in a few villages and then took it to the entire state.”

Today, the campaign is active in many villages of Uttarkashi district, where women and youth make seed balls and scatter them in the forests. Seed balls are prepared in the month of June-July just before the onset of rains as the seeds are most likely to germinate in wet soil. The clay balls are dried in the shade for three to four days until they are neither too hard nor too soft before being taken into the forest.

Tulsi Devi, the former village head of Nathuakhan village of the Ramgarh block in Nainital is optimistic about these seed balls. “We made seed balls with seeds of pumpkin, gourd, zucchini, cucumber, corn and pulses, and threw towards the forest. If we grow these vegetables and fruits near the forest, then our crops will survive. This is our third year of making seed balls,” she said.

The seeds are chosen carefully, in accordance with altitude and soil, said Semwal. His NGO consulted several experts such as Annapurna Nautiyal, vice-chancellor of HNB Garhwal University; NK Singh, assistant horticulture officer at Uttarkashi; Pankaj Nautiyal, Krishi Vigyan Kendra at Chinyalisaur, and a few others, to pick the seeds.

This year, seed donations are also being sought from the community. Semwal explained, “There is a feeling of conservation attached to seed donation. Many people have donated seeds; some give two, some give 10 for this campaign.”

Akash Nautiyal, a member of the Mangal Youth Foundation of Uttarkashi, said that they have been asking for seed donations from every house. “Farmers keep traditional seeds in their homes even today, which they sometimes give us,” he said.

In Nainital, Jagdish Chandra Jitu works closely with the local youth for the seed bombing campaign.  He returned to his village, Nathuakhan, last year after the pandemic struck. “Looking at what Dwarika Prasad Semwal ji was doing, I also made seed balls and threw them in the forest during the lockdown last year,” he said.

“After 10-15 days many seeds were seen sprouting. The places where we had thrown the seed balls are now green. It is our endeavor to take this campaign forward every year. Then we will see good results from it,” he said.

“Despite spending lakhs of rupees, plantation programs are only successful to the tune of 20-30%. But the seed bomb campaign is up to 80% successful,” Darmora explained. Beej bombing, meanwhile, is a zero-budget campaign where seeds, soil and fertilizers are all sourced through enthusiastic community participation.

Darmora recalled an example of the students of Kamad Intermediate College in Uttarkashi who left seed bombs in the forests of Buda Kedarnath from Anyar Khal in Uttarkashi. “A nursery of about three lakh plants has been prepared there. This campaign is strengthening people’s bond with the forest,” he said.

Savitri Saklani, a teacher of Rajkiya Kanya Vidyalaya in Cheenakholi village of Dunda block of Uttarkashi, said she and her students were also inspired by the campaign. “The students collected soil, manure and seeds. We made over a thousand seed bombs. Girls took the seed bombs with them when they went to collect grass for their homes and left the seed balls in the forest,” said Saklani.

Rajnish Singh, the chief horticulture officer of Uttarkashi, stated that despite the dangers that forest fires pose to these young plants, he has been suggesting seed bombing to villagers who come to him with complaints about wild animals destroying their crops.

Sandeep Kumar, former divisional forest officer of Uttarkashi, has been promoting it as a solution to landslides. The seed ball experiment was also tried in parts of the Rajaji Tiger Reserve, where forest guards walk in the forest carrying seed bombs, according to SS Rasaily, additional chief conservator of forests in Uttarakhand Forest Department.

In addition to enthusiastic support from the forest department, many well-known people like Governor Baby Rani Maurya and former Chief Minister Trivendra Singh Rawat have been endorsing the campaign, especially during the Harela, a folk festival. Though it is early to say whether the seed balls are enough to reduce the man-animal conflict in Uttarakhand, the community is determined to keep trying.

Varsha Singh journalist based at Dehradun. Views are personal.

This was first published in 101 Reporters. The original can be read here.