By ensuring regular maintenance and by preventing encroachment, villagers who consider their water bodies as sacred, protect centuries-old life-sustaining ponds 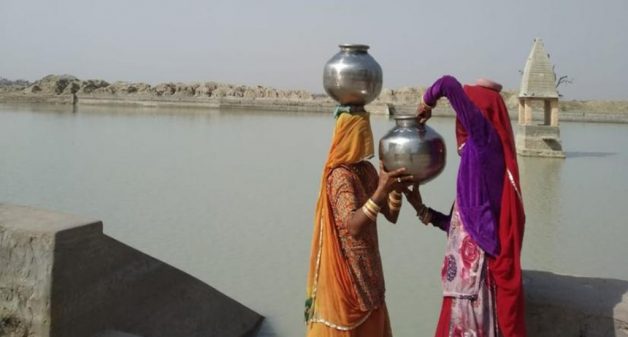 In the desert state of Rajasthan, water is akin to God, and the villagers here do everything in their power to conserve every drop of this precious resource. In Nagaur district, a simple way in which water is conserved in the villages is through their ponds.

Many of these ponds date back to several centuries and have been preserved through the efforts of the villagers alone. With no river and non-potable groundwater, villagers found effective ways to conserve and use rainwater.

To save rainwater, villagers dug tanks for individual use and they constructed ponds for community use. Even today, these community ponds form the primary source of water for a large number of villagers of Nagaur district.

In the town of Mundwa is the Lakholav pond, spread over about 80 bighas (bigha is a traditional unit of measurement that varies across different states. In Rajasthan, 1 bigha roughly equals 0.625 acres) and built more than 900 years ago. Even today, 90% of the population of the village uses the water from this pond for consumption.

A full pond can fulfil the needs of one lakh people for one whole year. Apart from the Lakholav, Mundwa has other ponds named Gyan, Pokhandi and Motelav. But Lakholav is the lifeline of Mundwa and its surrounding villages. The villagers consider it sacred and there are more than two dozen temples around it.

The groundwater of Mundwa is very deep and saline. Its high fluoride content makes it unsafe for consumption. Hence, Lakholav serves as the main water source. Ghanshyam Sadawat, former chairman of Mundwa municipality, said, “Even though the water of the Indira Canal reached Mundwa about four years ago, most villagers still drink water from the Lakholav.”

According to villager Ramswaroop Dahiya, villagers revere the Lakholav pond. “Most villagers start their day by worshipping the deities in the temples around the pond,” he said. Most villagers volunteer whenever the pond needs cleaning. Villagers have also ensured that the catchment areas stay free of encroachment, thus allowing the free flow of rainwater in the pond.

Ambuja Cement deployed machinery for excavation, shaping and desilting of Lakholav, whilst the villagers offered labor and machines to shift the huge amounts of soil.  An additional storage capacity of 3,626 cubic meters was created and the high-nutrient soil that was removed was added to the topsoil in the surrounding fields.

Over the last five to six years, a lot of efforts have been made for its beautification. The Mundwa municipality contributed close to Rs 2 crore to the project. Now there are railings on three sides of the pond, and a 5 feet walking track around the pond.

Lakholav pond is now looked at as a picnic spot, with its dense trees and chirping birds. Every year, on the evening of Roop Chaudas or Narak Chaturdashi – part of the Diwali festival, thousands of villagers light lamps at the pond to express their gratitude.

A pond in every village

Large ponds like the Lakholav exist in almost every village of Nagaur. Hiralal Bhati, a resident of Taausar village said, “Even though canal water reached the village through a pipeline about eight years ago, people in Taausar drink only the pond water. We do not like the taste of canal water and it is polluted.”

Similarly, the villagers of Chawali village in the Jayal tehsil, still depend on the Shiv Sagar pond. The Soyali pond of Goth village, Sunda Sagar of Gugriali, Ramsar of Ramsar village, Sonali of Sonali village, Kumbrao of Didiya Kallan are the other examples of well-preserved ponds.

Dhannaram, secretary of Urmul Khejadi Sansthan, an NGO based in Jhareli village, believes that the villagers have a huge role to play in the preservation of the ponds. “Ponds in the cities of Nagaur district have become garbage dumps, but the ponds in the villages are still as clean as they were centuries ago. The ponds secure the lives of the villagers and so they protect the ponds,” he said.

During a 10-day research tour conducted by the organizations Urmul Khejadi Sansthan and Unnati Sansthan in February 2020, the state of the ponds in the villages were examined and almost all were found to be well-preserved. “We went to 40 villages, and everywhere the villagers told us about their traditions of water conservation and water sanitation,” said Dhannaram.

According to the research report, no formal committees have been formed for the maintenance of the ponds in the villages of Nagaur. Every decision regarding the ponds is taken collectively by the villagers. Every village has implemented a certain set of rules regarding the ponds. There is no tolerance for littering in the pond. Emphasis is on keeping the catchment area free from encroachment.

The Lakholav pond and its catchment areas, for example, have been maintained clean for centuries perhaps due to the many rules laid down by the villagers. It is strictly forbidden to enter the pond wearing footwear. Bathing, washing clothes, bathing cattle in the pond are also not permitted. There is no restriction on carrying water from the pond for home. But water from ponds cannot be sold.

The report highlights that the ponds are maintained according to the villagers’ traditional knowledge. As per this knowledge, the villagers dig and clean the ponds, taking special care that the soil layer that holds the water in the pond is not damaged.

These ponds also remain full through the year. The ponds of Deh, Rol, Ramsar, Goth and Gugariyali villages have not run dry for many years and the Kumbhara pond of Didiya Kallan has not run dry for 30 years, states the report.

The rules made for the conservation of ponds may be unwritten but they are being followed religiously by the villagers. For example, there are 22 ponds in Rol village. Here, violators of the rules are immediately summoned to the village meeting area and they have to pay a penalty decided by the villagers.

Bisnani pond of Didiya Kallan village is situated on 25 bighas of land. Its catchment area is spread over 600 bighas. The rules made for the pond 500 years ago are still in effect today. From the pond in Deh village, one can carry water by filling pitchers, but one cannot fill it in tankers.

It is forbidden to carry water from Deediya Kalan’s pond to other villages. If anyone does so, he has to pay a fine of Rs 10,000. The women of the village work at the pond on every new moon day.

Dhannaram pointed out that many villages have a ban on carrying water from one village to another. “This is because the people of other villages do not follow the rules. Earlier, the people of Chhawata Kalan, Tangli and Tangla villages used to fill water from the pond of Chhawata Khurd. But about 12 years ago they disobeyed the rules and they were banned from carrying water,” he recalled.

Villages may also decide to stop or resume sharing water with other villages depending on availability. There are some villages where ponds are not maintained well and dry up quickly, forcing residents to look for other sources.

The rules laid down by the villagers have helped them preserve these ponds through the years. And the villagers of Nagaur are proud of it. Their active involvement in protecting their water sources sets an example for other regions with water scarcity.

Amarpal Singh Verma is a Hanumangarh-based journalist. Views are personal.