A smart village rises in Bengal through agricultural entrepreneurship

Inspired by examples of farmers earning ample returns through various techniques of chemicals-free farming, a farmers’ produce company in Rajkot is writing a new chapter on sustainable agriculture in arid and semi-arid zones 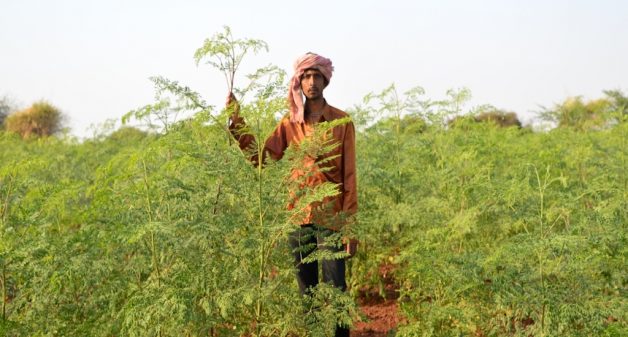 A moringa crop is ready for harvest at a farm near Rajkot town. (Photo by Hiren Kumar Bose)

“Farmers who are forced to sell tomatoes for Rs 1 for a kilo or onions for 50 paise and end up destitute have become the norm,” says Neetu Patel, an agri-entrepreneur. “That’s not the kind of farming we believe in. We are into growing medicinal plants and even crops like wheat, castor, sesame, moong, arhar, etc., by strictly following organic farming.”

The feisty director of Future Farms, which counts Patanjali Ayurved, Himalaya Drug Company, and Zandu Pharmaceuticals as clients, was speaking at her organic food store in a residential neighborhood in Rajkot. The shop stores a range of products from alfalfa capsules to organically grown lentils. In 2016, it supplied 750 tons of castors grown in Kutch’s Bhachau region to Gandhidham-based Castor Products Company for pressing into oil, which was exported to Wala Heilmittel GMBH in Germany. With 100 acres adding up every other month, the farmers’ produce company is writing a new chapter on sustainable farming in the country’s arid and semi-arid zones.

A recent study, titled Development of Optimal Crop Plans (OCPs) for sustainable groundwater management practices in Saurashtra region, and conducted by agricultural scientists of Junagadh Agricultural University (JAU) in two villages each of Jamkandorna taluka of Rajkot and Wankaner taluka of Morbi, both in Gujarat, revealed that farmers cultivate water-intensive groundnut and cotton because of high gross returns compared with other crops that consumed less water. The study suggested that in order to improve crop diversification and lessen farmers’ dependency on high water intensity crops, suitable crops be suggested after duly considering its income generating capacity.

The good news is that scores of farmers have already taken the initiative as suggested by the researchers and Neeta Patel’s Future Farms is one of them, which holds 8,000-odd acres in Gujarat’s Saurashtra and Kutch region, and benefits around 3,500 small and marginal farmers.

While most land holdings in Saurashtra’s Surendra Nagar, Bhavnagar, Junagadh, Rajkot, Morbi, Wankaner, and Jamnagar districts are within the range of 3 and 5 acres, the landholdings are bigger in Kutch due to its sandy soil and less rainfall. A sort of disruptive farming is being witnessed as scores of kheduts (farmers) abandon chemical-based farming and adopt organic farming. They use drip irrigation techniques, moving away from farming which relies heavily on over exploitation of ground water and increased dependence on chemical fertilizers and pesticides. These farmers feed the nascent market for organically grown crops, like wheat and lentils, besides fuelling the demand for herbal and medicinal crops, which go into making wellness products. 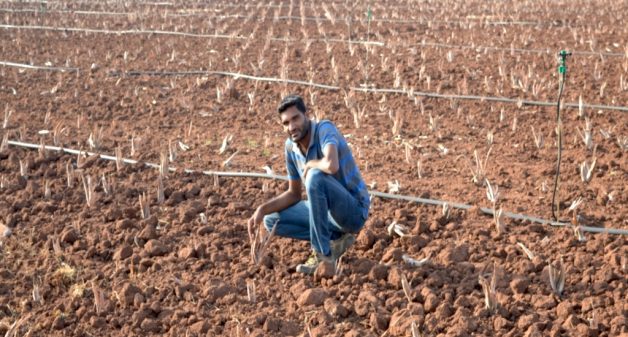 Future Farms has been reaching out to small and marginal farmers, organizing workshops commending the virtues of cow’s bio-waste based organic farming and giving them demonstrations on making compost, organic fertilizers and pesticides. “Each month we get two to three requests from farmers for organizing workshops,” K. E. Chandravaidya, Associate Professor at Mangrol-based BRC College who has held workshops on behalf of the farm produce company in villages of Rajkot, Junagadh and Mangrol, told VillageSquare.in. “Those who have followed our advice have found that the land which had lost its fertility has regained it and lessened their dependence on chemical inputs.”

In fact, ever since Subhash Palekar, the originator of Zero Budget Natural Farming (ZBNF), was awarded the Padma Shri, his daylong workshops held in villages of Saurashtra have been attracting huge participation. “Though we have been popularizing organic farming through our extension program within our university campus and through Kisan Vikas Kendras, spread in the 10 districts of Saurashtra, it has been Palekar’s workshops which have helped change the mindset of farmers,” Amrutlal M. Parakhia, director, Extension Education, Junagadh Agricultural University, told VillageSquare.in.

Like elsewhere, farmers here too are slowly realizing that soils rich in organic matter produce more nutritious food with higher levels of antioxidants, flavonoids, vitamins and minerals. An increase in soil organic matter, and therefore total carbon, leads to greater biological diversity in the soil, thus controlling the spread of plant diseases and pests.

Home to black or sandy soils, with a lower percentage of the humus content, the soil of Saurashtra has low availability of nitrogen, medium level of potassium and high level of phosphorous. From the point of fertility, the land is poorly supplied with plant nutrients. To get a reasonable yield each year, the farmer is forced to increase his dependence on chemical fertilizers and pesticides. With subsidy on fertilizers, except urea, being withdrawn, farmers have realized the futility of chemical-based farming.

From initiating the process of enriching the soil and completing the procedure involving the organic certification to post-harvest sale, Future Farms handholds the farmer for three years. It offers a fixed price to its associates (the farmers) decided at the beginning of the season. “We begin harvesting the tender leaves once the moringa plant is four months old, repeating the cycle every 45 days, not allowing them to flower or bear fruits. The leaves are dried on our solar drier channel for two days and ready for sale,” says Neetu at a 160-acre farm in Vinaygadh village in Than taluka of Morbi, 55 km from Rajkot town. The farm has rows upon rows of aloe vera, rose plants and shoulder-high moringa, all irrigated by drip, which alternately provides water and a fermented concoction of cow urine, dung, jaggery and powdered lentils.

Soon Future Farms plans to host free residential workshops at its Vinaygadh farm for farmers willing to take up natural and ecosystem-based (Natueco) farming method. “We make around Rs 1 lakh per acre from sargawah (moringa) and aloe vera,” associate Narbheram Vermoda told VillageSquare.in. “Our wheat fetches around Rs 800 per quintal, which is Rs 200 more than those grown with chemical fertilizer inputs.”

Natueco, popularized by Deepak Suchde, is built on the premise that it is possible to create a micro-climate to assure self-sufficiency. It follows the principles of ecosystem networking of nature in our farming system and emphasizes harvesting through a critical application of scientific inquiries and experiments that are rooted in the neighborhood resources. It depends on developing a thorough understanding of plant physiology, plant geometry of growth, plant fertility and plant biochemistry.

Like others, the 25-acre farm owned by Gautam Kangar at Bichdi village in Rajkot, follows the Natueco method and is lush with its banana grove, rose plants and lemon grass. Most farmlands are fenced with medicinal herbs like kakaj (Caesalpinia), senna (Cassia acutifolia), prickly pear (Opuntia (Cactaceae), jaljamini (Cocculus hirsutus), shatavri (Asparagus racemosus), neem, akado (Colotropis gigantean L.), guggul (Commiphora wightii), gliricidia, lemon grass, curry leaf, and adulsa (Justicia adhatoda). Besides creating a microclimate of sorts, these fences prevent the ingress of pests and bring in additional income to the farmers through the sale of its leaves and fruits.

“Prickly pear, which belongs to the cactus family, grows in the arid zones of the US and Mexico, as it does in India too, but through our research we have been to establish what Ayurveda literature has been claiming since long that its fruit is good for those who are anemic, especially those with low hemoglobin content,” says Sanjay Chauhan, associate professor of Pharmacy Department at Nadiad’s Dharamsee Desai University. “This makes our product unique.”

With Gujarat having become the ninth state in India to declare a policy for organic farming with a promise of offering a subsidy to those engaged in organic agriculture, it’s likely that more and more farmers will take to sustainable farming in the near future.