A group of farmers have converted a shunned wetland to practice fish farming, agroforestry and horticulture, providing employment and livelihood opportunities to impoverished villagers 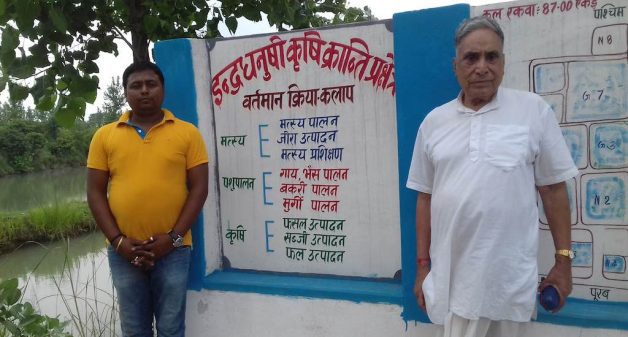 “I never dreamt that this wetland would turn productive in my lifetime,” gushed Mulki Devi, a farmer from Mutlupur. Satrughan Mahto is happy that his wetland, which was put to no use, is now a part of an integrated farm, earning him an income. He is confident the income will increase in the future.

Mulki Devi and Satrughan Mahto, both marginal farmers, no longer worry about their wetland that remained unused till recently, but find it incredible that it is a source of income now.

Mutlupur in Muzaffarpur district of Bihar is flood-prone, as Gandak River and Bagmati River skirt the village on the northern and southern sides, respectively. The village had 87 acres of low-lying wetland, locally known as chaur, which was considered a blight since it was not productive in any way. But a group of farmers have turned the place productive, generated employment for local residents and turned it into a livelihood resource for many, preventing inter-state migration.

It was Gopalji Trivedi, former vice-chancellor of Rajendra Prasad Central Agricultural University at Pusa, now a practicing farmer in Mutlupur, who convinced the farmers to use the barren wetland for agricultural purposes. “I persuaded the farmers to change the face of the low-lying Korlaha Chaur near Mutlupur. In spite of the initial reluctance, they joined hands and the wetland that was derelict for decades is the village’s center of attraction now,” the octogenarian told VillageSquare.in.

Twenty-two farmers including Trivedi, whose landholdings ranged from small to big, joined hands to develop the wetland. They formed an association and an advisory committee to manage the development process. As most of the farmers are local residents, they met regularly to plan, share the progress and to discuss about difficulties and to arrive at solutions.

The group decided to experiment with integrated farming in the chaur. They consulted veterinary, agricultural, fisheries and horticultural experts so as to use the latest technology and developments in integrated farming.

“Our focus is on fisheries, as it is the most suitable for wetland. We have integrated a poultry, a goat farm and a dairy unit into our development plan,” Trivedi said.

In the Korlaha Chaur, there are 17 big ponds, the largest spreading across 14 acres. Nearly 50 local residents, mostly youth, fish in the chaur’s ponds to sell in nearby localities.

“Every day I take fresh fish from the chaur on my bicycle and sell them in villages near Mutlupur. Now I am able to earn my livelihood and I have stopped thinking of migrating to other states for work. There are dozens like me here, who are selling fish as it is a profitable business,” Mukesh Kumar, a Dalit youth, told VillageSquare.in. 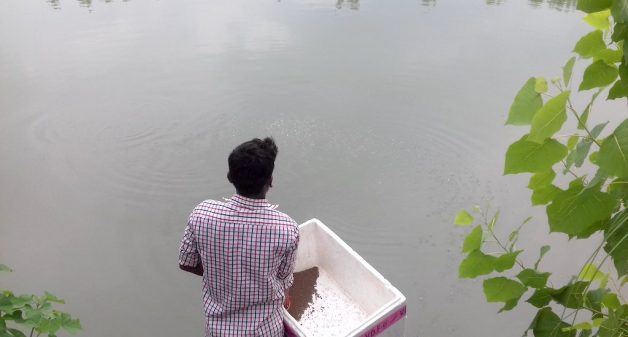 A farmer tends to a fishery developed in the wetlands. (Photo by Mohd Imran Khan)

Ramchander Prasad said that availability of fishes in the big ponds has made it easy for youth like him to make a living locally. “The way the chaur has been developed into a big fish farm provides us an opportunity to do fish business. Our people prefer these to the fishes from Andhra,” said Prasad.

According to officials in Bihar’s fisheries department, the state needs over 600,000 tons of fish annually, whereas the production is less than 500,000 tons. But, more than 30,000 tons of fish from Bihar are sold in West Bengal and exported to Nepal. Presently, the per capita annual consumption of fish in Bihar is 7.7 kg compared to the national average of 10 kg per person. Bihar is not producing adequate fish to fill its own demand despite having plenty of water resources including wetlands. The state government has decided to work towards making Bihar a fish-surplus state by 2020.

“Thousands of hectares of wetlands across the state could be used for aquaculture. This can not only turn Bihar into a fish-surplus state but make it a main supplier of fish across the country,” Shivraj Singh, manager of a fishery, told VillageSquare.in.

In a bid to create a green cover, the farmers have planted over 16,000 timber saplings. Hundreds of fruit-bearing trees such as jamun (Java plum), jackfruit, Indian gooseberry, ber (Indian date), sweet lime, mango, guava and lemon bring them regular income. Vegetables and food grains are also cultivated. “Our goal is to utilize every bit of our natural resources to produce food,” Trivedi pointed out.

Agriculture experts had repeatedly said that dry land agriculture is unsuitable for wetland areas. But the farmers are happy that they have succeeded in their experiment. Mangala Rai, former agriculture advisor to the chief minister of Bihar and former Director General of Indian Council of Agriculture Research (ICAR), has lauded the farmers for being an inspiration to other farmers in the use of wetland.

As the benefits of agriculture and horticulture in the chaur are obvious, people envy Korlaha, said Mulki Devi with a light-hearted smile.

The wetland had been a safe haven for anti-social elements till five years ago. The negative outlook associated with it has changed and it is now a symbol of prosperity.

The development has created employment opportunities for many local youth, besides being a source of income for the farmers.

According to Singh, the plan is to generate 200 jobs in the coming years, besides indirect employment opportunities for neighboring villagers.

There are 941,000 hectares of chaur in Bihar, which remain submerged in water for six to seven months in a year. Of this, more than 500,000 hectares have been declared suitable for fishing. “Despite the large population of traditional Shahni (caste) fishermen, only 500 acres are being used for fish farming,” an official of the state fisheries department told VillageSquare.in.

Sukhdeo Rai, a farmer, said wetlands are not wastelands; they can pave the way for rural people towards prosperity, if developed on the lines of Korlaha Chaur.

Impressed by the success of Korlaha Chaur development, another group of farmers is in talks with Singh’s farm to develop their 70 acres of wetland.

According to Mangala Rai, if managed efficiently, wetlands of Bihar can be turned into an agricultural goldmine. He stressed the need to adopt latest scientific and technological practices for better management of wetlands in the state.

“If we can develop wetland for integrated farming in Mutlupur, people in flood-prone villages in north Bihar, particularly in Seemanchal, Koshi and Mithilanchal regions, can do the same. Use of wetland for agriculture and fisheries would change the face of rural Bihar. It can also be an example for the country, ending the hopelessness of farmers,” Trivedi told VillageSquare.in.