Linking technology and Aadhaar unique identity numbers, the direct benefit transfer of fertilizer subsidy in Andhra Pradesh has helped in curbing malpractices and has benefited farmers by preventing leakages 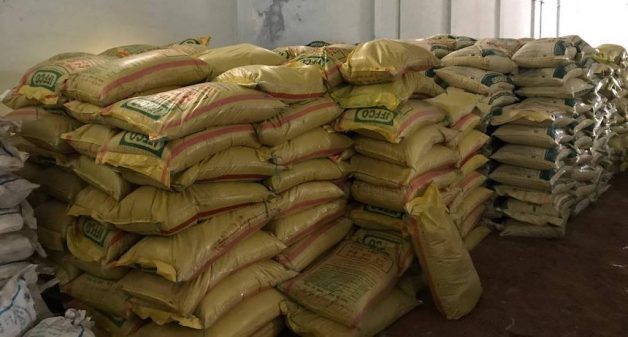 Fertilizer bags stacked in a warehouse in Andhra Pradesh. (Photo by Bikalp Chamola)

At 30% of all the subsidies that the Government of India provides, fertilizer subsidy is the second largest, as per the union budget of 2017. Aadhaar-enabled Fertilizer Distribution System (AeFDS) is a direct benefit transfer (DBT) model aimed at streamlining the fertilizer supply chain and decreasing the burden on the exchequer. The project aims to improve soil health by curtailing overuse of fertilizers and reducing the input costs for farmers.

AeFDS was introduced in 2016 as a pilot scheme in 900 fertilizer retail outlets in Krishna district and 1,050 outlets in West Godavari district of Andhra Pradesh. The project is being implemented by the Government of India, to which Tata Trusts and a consortium of partners provide planning, strategic and funding support.

The fertilizer subsidy in the country is managed by the Department of Fertilizers, Government of India. It is an indirect subsidy, with the beneficiary paying a small portion of the product price and the government reimbursing the balance amount to the manufacturer.

Thus the subsidy is not credited to the beneficiary but to the manufacturer. The subsidy is released on the basis of the acknowledgement of the retailer on the sale of the fertilizer. Hence, the tendencies to inflate the cost of production and the number of beneficiaries have further burdened the state exchequer. AeFDS aims to eliminate the problem.

What started as an innovative idea by the collector of Krishna district with 20 small retailers was expanded to the whole district after recognizing its potential to create significant impact.

One of the first challenges to the scheme was the retailers’ apprehension. They apprehended the possibility of farmers procuring fertilizers from the adjacent district of West Godavari. This was a real risk likely to affect the pilot scheme and hence the scheme was introduced in West Godavari district as well.

“The idea of selling fertilizers using an electronic device is very thrilling,” Sudhakar of Rayanpadu village near Vijayawada told VillageSquare.in. He has been working as a retailer selling fertilizers for over a decade, with a customer base of roughly 50 in and around his village. Sudhakar’s excitement is due to the introduction of e-POS (electronic point of sale) devices for sale of fertilizer under the new AeFDS.

The machine confirms the identity of a farmer through the Aadhaar database, retrieves land data from digitized land records and links it to the farmer’s soil health card (SHC) recommendations.

SHC and fertilizer use

The combinations also vary depending on whether the farmer is the owner or a sharecropper. A sharecropper would use lesser fertilizer or choose a less expensive one, as the impact of the fertilizer would be obvious only in the long run. 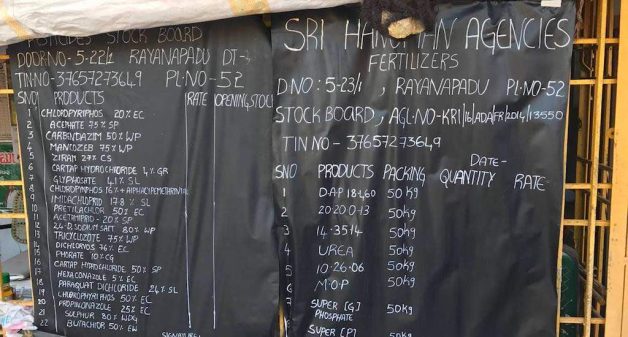 The SHC should ideally determine the amount of fertilizer to be sold to a farmer, thereby fulfilling the objective of the program. At present, the SHC recommendations do not capture the seasonal variations in the nutrient composition of soil and hence not of much value to the farmer. Some farmers have SHC that are about four seasons old. Therefore the sale of fertilizer remains the same, except for the availability of data on the quantity and type of fertilizer purchased by each farmer.

“Most of us are sharecroppers. Earlier some big players used to accumulate large quantity of fertilizers before we could mobilize enough money to buy them,” Bhanu Pratap, a sharecropper, told VillageSquare.in. Farmers in Kotikalapudi village of Krishna district told VillageSquare.in that tracking fertilizer sale using e-POS machines has brought down hoarding resorted to by large farmers.

The retailer has to now ensure that each of his customers has an Aadhar card and is also in a position to pay cash up-front. Thus, credit system for purchasing fertilizers has been eliminated, as credit rates were often high, besides fertilizer being used as collateral for credit.

In Krishna district, since the launch of the program, there have been roughly 130 cancellations of the fertilizer retailer licenses. Some of the reasons are that the inefficient ones or the ones engaged in black marketing earlier are now not able to continue the practice. Also, several aggregators who worked on a part-time basis as seasonal sellers do not want to adopt this method of selling.

Even after AeFDS coming into effect, MRP (maximum retail price) has remained the same and hence the farmers see no impact with regard to price. The retailers still maintain a hard copy record of the fertilizer sale, as they are yet to have complete confidence on the machine.

The transaction time per customer has increased, especially due to network issues in rural areas. Sometimes this forces the retailer to sell the fertilizer manually, a habit that in the long run would prove detrimental to the manufacturers and hence wane away naturally.

In order to counter the issues pertaining to network signals, the retailers have devised various ways to adjust. First, it is not always the owner who shows up for the purchase. In such cases, to authenticate identity, ‘Other’ option is used on the machine and hence the retailer has to input only the Aadhar number of the owner, doing away with the use of fingerprint scanner.

Secondly, sale is clubbed in order to keep the farmer happy. Say, a farmer visits the outlet in the morning and the machine is not able to authenticate his identity due to poor network issues. The retailer sells it to him, especially small quantities and clubs it with the purchase of the next farmer, when the network is strong enough to establish identity. Though this may misrepresent an individual farmer’s purchase, the government can keep track of the overall quantum of sale.

DBT in fertilizers has come at a good time, where small farmers can now access good quality fertilizer without the fear of being cheated by unscrupulous retailers. The change does not cause any inconvenience to the farmers as the prices are the same as they were earlier.

The inefficient and seasonal retailers slowly move out, as they are reluctant to adopt technology. Hoarders are now easily identifiable and therefore the practice of hoarding of fertilizers by large farmers is not feasible anymore.

Even though the transaction time per farmer has increased, retailers have devised ways, though temporary, to overcome the problem. Optimum usage of this model along with SHC could lead to improvement of soil health. The idea of SHCs standardizing fertilizer use needs to be worked upon.

While the challenges present in other DBT schemes are relevant for this model, this is an efficient way to tackle leakages in the fertilizer supply chain, without causing much disturbance to the end user. Standard operating procedures for AeFDS under preparation, would help the district administration and other stakeholders implement the DBT scheme effectively.

Sasanka Kireeti, an engineering graduate from BITS Pilani, works with Tata Trusts as a program officer in Andhra Pradesh. Bikalp Chamola is a researcher with Centre for Development Research, Pune. A graduate of Institute of Rural Management Anand, earlier he worked with Rajeevika livelihood mission in Rajasthan. Views are personal.

An engineering graduate from BITS Pilani, works with Tata Trusts as a program officer in Andhra Pradesh.