Farm ponds, built to harvest rainwater and irrigate rain-fed fields, are doubling up as fishponds, helping farmers overcome vagaries of agriculture with an additional source of income 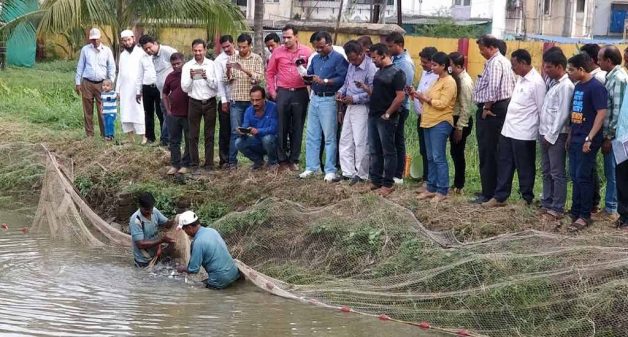 They came from the interiors of Maharashtra, namely Sangli, Satara, Nashik, Nanded, and Kolhapur and also from coastal towns like Panvel, Ratnagiri and Alibaug — the foot soldiers of blue revolution. They came to attend a two-day workshop on inland fish farming, conducted in the tiled-roof barracks of the British era, in the Kharland Research Centre (KRC) attached to Konkan Krishi Vidyapeeth in Panvel.

The bi-annual paid workshop in its fifth year had 35 farmer participants this October. So far over 400 farmers who cherish a dream of having their farm ponds and engage in fish farming have attended the workshops. Their wish is to supplement their income to overcome issues like failed monsoon, lack of access to water due to incomplete irrigation projects and unfair pricing offered for their farm produce.

Like elsewhere, climate change poses a challenge for rain-fed agriculture and Maharashtra is especially vulnerable as about 80% of agricultural land in the state is rain-fed. With constraints on expanding irrigated areas, farm ponds have become inevitable to sustain agriculture in the state.

Farm ponds to the rescue

Farm ponds, which take around a week of rain to fill, are permanent assets, helping farmers to save water in their farms to use it for agricultural or horticultural purposes. For instance, Hiwargaon Pawsa village in Sangamner tehsil of Ahmednagar district, which till recently cultivated traditional crops like horse gram, wheat, pulses and onion, switched to pomegranate, thanks to its 300 farm ponds. Fish seeds and fingerlings being distributed to farmers. (Photo by Kharland Research Centre)

According to Vivek Vartak, scientist (Fisheries) in KRC, the workshop is a much-awaited event among farmers who wish to create reserve storage of water for farming and for rearing fish to supplement their income. “Participants come from all over the state and attend the workshop by paying a fee of Rs 3, 000,” Vartak, a biotechnology scholar and the workshop’s coordinator, told VillageSquare.in. “We educate them on farming fish like rohu, katla and mirgail in fresh water, besides tilapia and basa in brackish water. They also learn to rear shrimp, prawns and crab in sea water.”

Established in 1943 and spread over 32 hectares, KRC is among the few institutions in the country engaged in the rehabilitation of kharland or tidal land. They do so by introducing brackish water fish farming and developing salinity-tolerant paddy and vegetable varieties. With six ponds used as hatcheries, KRC also provides fish seeds and fingerlings to those interested in inland fish farming.

National Horticulture Mission (NHM), which offers a subsidy for digging and lining the farm ponds, has played a key role in popularizing fish farming. The government of Maharashtra has been providing a subsidy to poor farmers who wish to construct a farm pond on their land, so as to encourage them to harvest rainwater.

In 2007, the state government decided to provide a one-time grant for building the ponds. But the project gathered steam only in 2009 when 25 drought-prone districts were selected and 37,000 ponds built. Construction of the ponds is being done through eight schemes, including the Maharashtra Rural Employment Guarantee Scheme.

In February 2016, the Maharashtra government introduced the Magel Tyala Shettale (farm pond on demand) scheme. Initially, owing to lack of funds, the scheme was applicable only for villages with 50% crop failure. Now with funds available from MGNREGA (Mahatma Gandhi National Rural Employment Guarantee Act), the scheme has been extended to the entire state and is being implemented by the Department of Agriculture of Maharashtra.

Ravindra Patil (43) of Aundh village in Palghar grows paddy in his 25-acre farm. As the rains are not enough to irrigate his crop, he dug up a pond (measuring 44m x 44m x 3m), availing the subsidy provided by the agriculture department. Presently he grows fresh water fish that fetches him Rs 120 a kilo. “After the eight-month growth period I harvest them, which brings me around Rs 80, 000,” Patil informed VillageSquare.in.

With the Konkan belt, which receives between 600 mm and 1,000 mm of rainfall, farmers are building farm ponds with zeal. In Nawde village, 9 km from Panvel town, Deepak Khamkar (45) who attended a KRC workshop in February 2015, built a pond in his one-acre farm, investing around Rs 3.50 lakh. “I grow tilapia and basa, which fetch me between Rs 120 and 150 per kg, leaving me a profit of around Rs 1 lakh,” Khamkar told VillageSquare.in. Thanks to the proximity of his plot to the creek, he grows crabs also, which bring him an additional income. 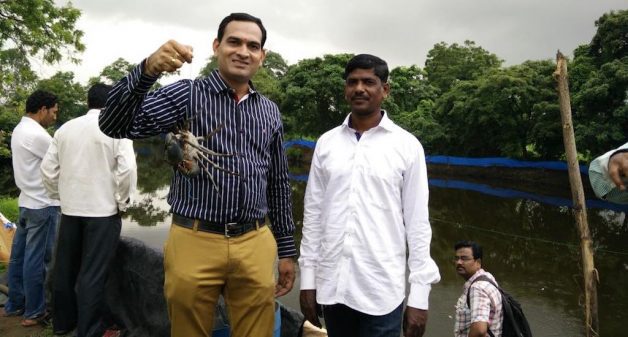 Interestingly, most farm pond fishers vouch for tilapia and basa that have led to a change in the local palate. Endowed with an extremely high breeding rate and tolerant to a variety of aquaculture environments, tilapia can be farmed in brackish or salt water and also in pond or cage systems. “Quick growth and higher body weight of the fish is achieved through nutritious feed. If grown in cages it easily fetches around Rs 150 a kilo,” Vartak, who holds a patent for DNA barcode labeling for fish, molluscs and crustaceans, told VillageSquare.in.

A native of Vietnam, basa (Pangasius Bocourti) has replaced the traditional varieties namely river sole, bhetki and ghol or pomfret, both in households and eateries across India. Softer than other varieties, it doesn’t smell and sells between Rs 42 and Rs 47 per kg.

Of the many success stories of farmers growing tilapia and basa, is 42-year-old Ashok Gaikar of Khandpe village, located 8 km from Karjat town. “Earlier when I took the fish harvest to the market I rarely got a good price and the unsold stock had to be thrown away,” Gaikar, who had a yield of 18 tons in 2016, told VillageSquare.in. “But ever since I took to cage fishing, I harvest the quantity required and I am able to dictate the price.”

With marine fish catch dwindling each year and pollution of the seas a reality, the future of blue revolution seems to be in pond fishing and in fish like tilapia and basa.