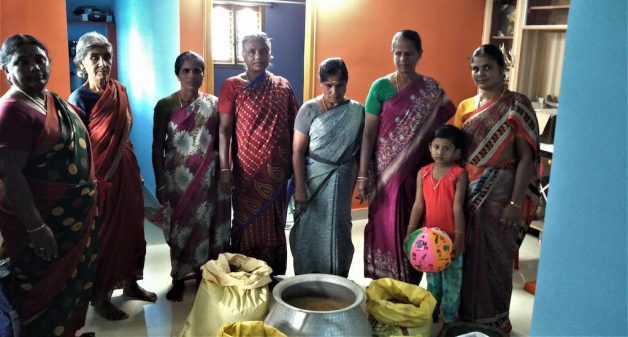 Women farmers of Dharmapuri are cultivating millets to protect themselves from the vagaries of erratic rainfall. (Photo by Karthikeyan Hemalatha)

Every time it rains in Dharmapuri, M. Molagappan, a retired farmer from Maraavadi village, claims to know its name. The year is split into periods of 13.5 days, he says, and each period has a different name. And rains in each of these periods have a different character.

“Ubba mazhai literally means heavy rains, and usually comes in the months of October. Pazhaya mazhai, or old rains, are rains that come at the end of the Tamil year, in March,” he said, but failed to recall all the names of rains in different seasons that you can find in Tamil literature.

“We have forgotten their names, the rains have forgotten us,” quipped the state president of the Thamizhaga Vivasayigal Sangam (Tamil Nadu Farmers Union) S.A. Chinnasamy.

Youngsters and even middle-aged farmers across the Dharmapuri district in the southern Indian state of Tamil Nadu failed to name the different types of rain, something their ancestors once knew so well. “It is because it doesn’t rain like the way it used to. The last 15 years seem to be particularly bad,” said Chinnasamy.

While Chinnasamy and Molagappan may be reminiscing about the good old days of rains and agriculture, scientists say there is truth in their observations. Climate change is to blame for it. Data from the agriculture department shows that apart from 2016, the district has received average or above average rainfall since 2004.

In 2016, Dharmapuri was at the epicentre of Tamil Nadu’s worst drought in 140 years, when the district received less than half its average rainfall. While the average is 853.1 mm annually, it received only 397.6 mm of rain during the drought year. “However, it’s not just the total rainfall. Its distribution over area and time are essential for farming, and this has been a failure in Dharmapuri,” said Chinnasamy.

Farmers in the dry land districts in Tamil Nadu, like Namakkal, Dharmapuri, and Krishnagiri, are the first ones to face the consequences. “Dharmapuri receives rains from both the south-west and north-east monsoons, so farmers can have two harvests, sometimes three, a year. Kanyakumari is the only other district in Tamil Nadu where this bi-modal climate is found. For a dry land district to have up to three cropping seasons is very unique,” said Mani Raj, agriculture officer for the district.

The south-west monsoon, which sets in June, gives rain to the entire country except Tamil Nadu and the trans-Himalayas in the far north. While the Western Ghats prevent moisture-laden clouds from entering Tamil Nadu, as do the Himalayas for areas north of the high peaks. 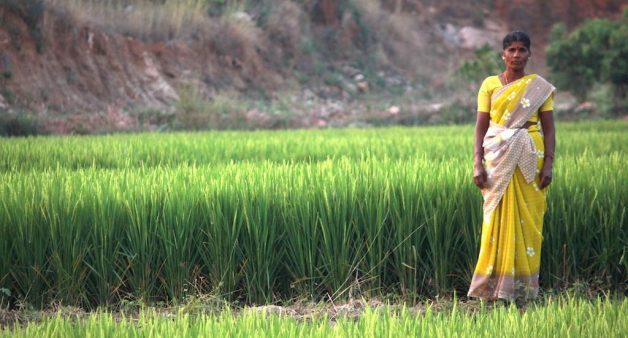 Valliammal, who manages a rain-fed farm in Dharmapuri district of Tamil Nadu, grew rice for the first time in three years. (Photo by Karthikeyan Hemalatha)

Despite having up to three bouts of rain, Dharmapuri is considered drought-prone. Climate change and encroachment of water bodies are making it worse, experts say. While the total annual rainfall remains normal on paper, the duration of it has decreased and the intensity of rainfall has increased.

“We have had times where the district received more than 120 mm of rain in just one day,” said Mani Raj. “While total rainfall hovers around normal, the number of rainy days has decreased. This is not conducive to farming as it gives farmers a very tight window to sow. The unpredictability of rains also makes their traditional wisdom about rainfall patterns go for a toss.”

The higher intensity of rainfall also deprives the region’s groundwater from being recharged. “There is no time for water to percolate. And most of the rainwater gets wasted as run-off. With water bodies being encroached upon, the situation in Dharmapuri and other regions is becoming worse,” said S. Paneerselvam, professor and head of Agro Climate Research Centre at Tamil Nadu Agricultural University (TNAU). “The only way to fight climate change is to ensure there is proper infrastructure to trap and channelise rainwater.”

While the coastal regions of Tamil Nadu are receiving larger amounts of rainfall, there is a decline in inland regions, especially dry land areas like Dharmapuri, Namakkal, Erode, and Krishnagiri. Across the state, downpours are observed in shorter duration and in higher intensity.

“Coastal regions, up to 20 km landward from the sea, saw a 7% (projected) increase in rains between 1990 and 2020,” said A. Ramachandran, a professor at Anna University’s Centre for Climate Change and Adaptation Research. These observations are from a paper titled Climate change projections for Tamil Nadu, India: deriving high-resolution climate data by a downscaling approach using PRECIS.

Dharmapuri is especially vulnerable to climate change, in comparison to other districts in Tamil Nadu. In the projections, “while the state overall is showing a decrease of 2% in rains, dry land districts like Dharmapuri show a 4% decrease in the 30-year-period between 1990 and 2020,” Ramachandran said.

Not just rainfall, temperatures are also changing. In his study, Ramachandran observed while Tamil Nadu is witnessing a 0.9 degrees Celsius increase in temperature, the north-western agro-climatic region in the state is seeing a 1.1 degrees Celsius increase. By 2100, there will be a 10% decrease in rainfall across the state, the professor said, adding, “It is now up to policymakers and bureaucrats to come up with an action plan and mitigation tactics to ensure the state has a climate-proof future.”

Farmers in Dharmapuri are, however, not waiting for the state machinery to get out of their inertia. According to data from the state government, Dharmapuri leads in millet production. In the five-year period ending in 2012, the district had produced nearly 13,000 tonnes of millets grown over an area of 10,550 hectares — far higher than any other district.

Women farmers are showing the way in making themselves climate-proof by growing hardy millets. In 2016, the state saw one of its worst droughts in 140 years and Dharmapuri was its epicentre. “For the first time in three years, I managed to grow rice. Being on the hills, with no irrigation canals I can grow rice only when it rains. Otherwise, I am happy growing millets which I can feed my family with,” said Valliammal, who has an acre of rain-fed land. “With rains drying up, more and more animals from the forests are coming out and damaging our fields. I ask my husband to stay overnight to ensure there are no wild pigs or peacocks coming.”

Rice is, however, not first priority. Women farmers tend to grow millets and a variety of pulses, oilseeds, and vegetables. This gives them a cushion. “When one crop fails, we can depend on others. And this helped us go through the drought of 2016. Along with the free rice provided by ration shops, women who did multi-cropping and grew millets managed better than men who grew only cash crops,” said the founder of Tamil Nadu Women’s Collective Sheelu Francis. “While men grow only water-intensive cash crops like rice and sugarcane, women grow millets to feed their families. These crops are hardy against the vagaries of climate.”

The state planning commission views millets and pulses as an effective way of fighting climate change and reduced rainfall. They advise farmers, through the state government, to have mixed cropping to improve soil health and be more resilient to reducing rains.

“The ideal cycle is to first plant pulses, which through rhizobium, can fix atmospheric nitrogen to the soil, increasing its fertility. Following that, millets should be sowed so that they can utilise the improved soil. Millets are C4 type plants, which means they are more efficient in converting atmospheric carbon dioxide to sugar. This means more biomass,” said K.R. Jahan Mohan, Head of Agricultural Policy at Tamil Nadu State Planning Commission. “In the worse case scenario of failed crops and no rain, at least the cattle will have biomass to feed on.”

Karthikeyan Hemalatha is a journalist based in Bangalore.

Karthikeyan Hemalatha is a journalist based in Bangalore.