After Karnataka government pumped Bengaluru city’s treated wastewater into Kolar’s tanks last year, farmers made use of the raised groundwater table to grow crops amidst concerns of contamination 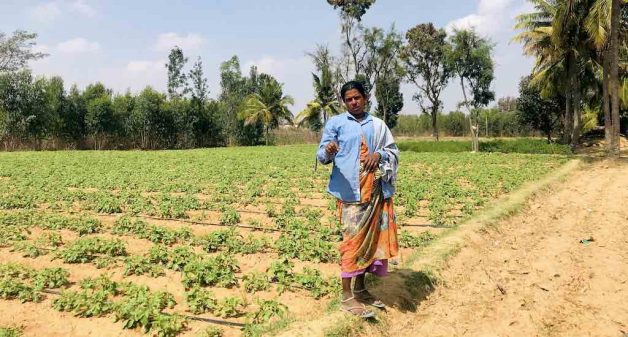 Manjula Amma's field next to Laxmisagar tank, where Bengaluru’s treated wastewater is stored, has sufficient water for irrigation (Photo by Nidhi Jamwal)

Kolar in Karnataka is one of the 24 districts in the country identified as eternally drought-prone. Being in a semi-arid zone with no perennial river, the district faces recurring droughts. This year, as Karnataka faces an extreme drought, all the blocks in Kolar district have been declared drought-hit.

But, Manjula Amma, a farmer living near Laxmisagar tank in Kolar isn’t worried about the drought. “The water table in our village is high and my 75-year-old well is brimming with water. I have dug drainage channels in my agricultural field to drain out excess water,” she said, tending her potato crop.

Somnath, a neighbor of Manjula Amma, is confident of growing four crops in a drought year. “Till a year ago, I used to grow only one crop of ragi (finger millet). But, this year I have already grown potato, paddy, and vegetables like brinjal, chili, beans and carrot. And, I will raise an additional rabi (winter) crop too,” said Somnath, who owns two acres.

The reason the fields of farmers like Somnath and Manjula Amma are lush green in an extreme drought year is the treated wastewater of Bengaluru city stored about 55km away in the Laxmisagar tank. It has raised groundwater level in neighboring villages where dug wells have come to life and are being used for irrigation.

“People in Kolar face acute water scarcity. Rather than meeting their needs, the government is supplying them poorly treated wastewater of Bengaluru,” said Prince Isac. He is an advocate representing Anjaneya Reddy of Chikkaballapur, who has filed a special leave petition in the Supreme Court of India (SC) against pumping of Bengaluru’s wastewater to Kolar.

Reddy had initially approached the Karnataka High Court in June 2018, which, in its interim order last July restrained further pumping of Bengaluru’s wastewater. But, two months later, it modified the interim order and permitted resumption of wastewater pumping. This prompted Reddy to approach the apex court. “Groundwater, the only source of drinking water for the people of Kolar, is at a high risk of contamination from Bengaluru’s wastewater,” Reddy told VillageSquare.in.

In January this year, the apex court restrained the state government from pumping city’s treated wastewater into Kolar’s tanks for groundwater recharge. But, on April 5, it lifted the stay imposed on the Karnataka government to pump Bengaluru’s treated wastewater from sewage treatment plants (STPs) into the irrigation tanks of Kolar, including the Laxmisagar tank. 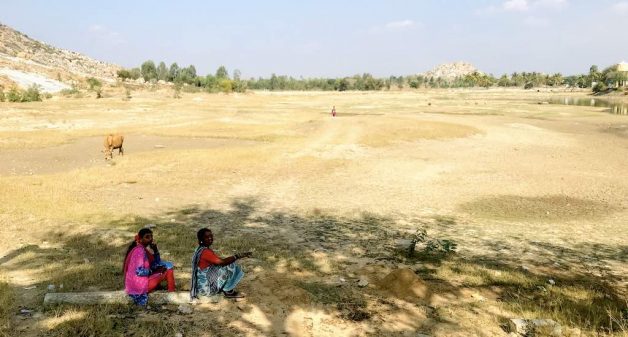 “The apex court has vacated the stay only on the basis of an assurance from the BWSSB (Bangalore Water Supply and Sewerage Board) that the latter will supply properly treated wastewater for irrigation in drought-prone Kolar and Chikkaballapur districts. This is unbelievable,” said Isac.

From STPs to irrigation tanks

In 2014, the Karnataka government envisaged two projects – Koramangala-Challaghatta Valley, or KC Valley project, and Hebbal and Nagavara Valley or HN Valley project – to supply treated wastewater from Bengaluru to irrigation tanks in neighboring districts of Kolar, Chikkaballapur and Bangalore Rural.

The HN Valley project envisages pumping of another 210 mld of secondary treated wastewater from Nagavara, Hennur and Horamavu STPs of Bengaluru to Amani Gopal Krishna Kere and onwards to fill 65 tanks in Bangalore Rural, Bangalore Urban and Chikkaballapur districts.

According to Dipankar Saha, former additional director, Central Pollution Control Board, wastewater is a displaced resource and every effort must be made to reuse it after proper treatment. “Use of treated wastewater in agriculture should be promoted, provided there is no mixing of industrial waste, and STPs meet the prescribed standards, which are stringent enough to address the risk of contamination,” Saha told VillageSquare.in.

Saha said that the secondary wastewater treatment standards prescribed for STPs in India are very stringent, and if followed, such treated wastewater can be safely used for agriculture. “We are investing money worth thousands of crores of rupees in setting up treatment plants. We should meet the prescribed standards and reuse wastewater in agriculture,” he said.

“We have the science and technology to reuse treated wastewater in agriculture. And, there are enough indications that such projects should be undertaken,” said a professor at IISc, refusing to comment any further as the matter is in the courts. Officials of BWSSB and the Minor Irrigation and Ground Water Development Department were unavailable for comments.

River to the rescue

As per the South Asia Drought Monitor of Indian Institute of Technology (IIT) Gandhi Nagar, as of 29 March 2019, almost 42% of the country is facing drought. Karnataka is facing acute drought, as 156 of its 176 blocks have been declared drought-hit. 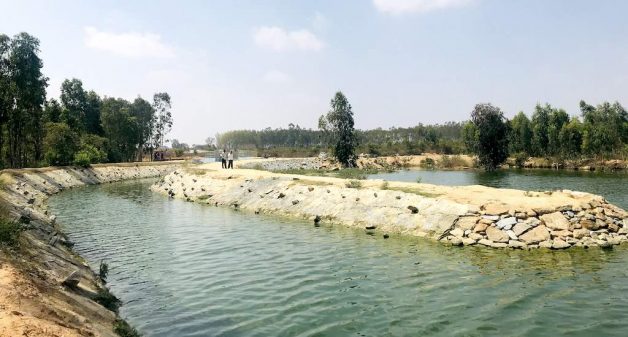 Treated wastewater of Bengaluru stored in Laxmisagar tank in Kolar, which is also recharging groundwater (Photo by Nidhi Jamwal)

Venkatesh, a farmer owning 6.5 acres of land in Kutaganahalli village in the outskirts of Bengaluru, reminisced his failed attempts in finding water for irrigation. “In the last few years, I have spent over Rs 50 lakh in digging 26 bore wells, some till a depth of 1,000 feet, but found no water,” Venkatesh told VillageSquare.in. “I was about to sell my land when I got the idea of lifting water from Dakshina Pinakini river that passes through Bengaluru.”

Dakshina Pinakini originates in the Nandi Hills in Chikkaballapur district and flows through Karnataka and Tamil Nadu to join the Bay of Bengal. A large part of Bengaluru’s wastewater flows into it through Bellandur and Varthur lakes and other water channels.

Three years ago, Venkatesh laid a 6km long pipeline, and attached a 15 HP pump, to lift water from Dakshina Pinakini. He brings the water to a pond in his farmland, which has raised the groundwater table in the surrounding area. Venkatesh has enough water to irrigate his field all through the year using a sprinkler system. He grows potato, tomato, chili and capsicum.

Farmers in Vijapura near Bengaluru have developed a system of rotation of wastewater for irrigating their mulberry fields, mulberry leaves being used to feed silk worms.

According to S. Vishwanath, advisor with Bengaluru-based Biome Environmental Trust, which conducts research on water and sanitation, if the World Health Organization’s Guidelines for the safe use of wastewater, excreta and grey water are followed, Bengaluru’s treated wastewater has the potential to irrigate 24,000 hectares of land using drip irrigation system, reduce fertilizer use by 60%, drought-proof the land, enhance shallow aquifer levels, enhance biodiversity and enable pisciculture.

Jakkur Lake in Bengaluru, which is an integrated wetlands system, shows the way forward. Treated wastewater from a nearby 10mld STP, along with some untreated wastewater passes through constructed wetlands of macrophytes and algae. An April 2014 report of Centre for Ecological Studies, IISc reads: “The major nutrient removal and polishing is done by the manmade wetland and the (Jakkur) Lake. The integration of sewage treatment plant with wetlands (consisting of reed bed and algal pond) has helped in sustained treatment of water for reuse.”

It is reported that wastewater irrigates between 1.5% and 6.6% of farmland worldwide. Class I and Class II cities in India generate 75,020 mld of wastewater, reports Sewage Treatment Market in India 2018. Can this water be treated properly and used in agriculture, as climate change is expected to make monsoons more erratic?

“In an era of climate change, seawater and urban wastewater, to an extent, can be called climate-proof water. Vast areas of our cities and towns can be irrigated by such waters,” Vishwanath told VillageSquare.in. Such areas can be declared as Special Agriculture Zones and supplied with wastewater after eliminating industrial effluents and heavy metals.