With climatic conditions similar to that of date-growing Kutch, Solapur farmers have started cultivating date palms, finding the extended growth period worth the wait financially 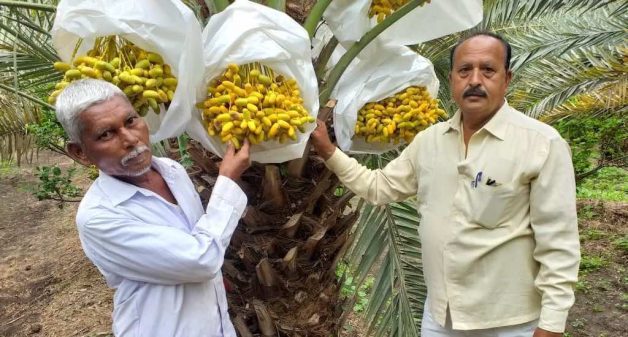 For over a month, a steady stream of farmers flocked the 32-acre farm of Rajendra Deshmukh in Barshi village of Solapur. Their visit was prompted by a message shared among farmer groups on a mobile platform, of luscious dates in shades of yellow, saffron and scarlet hanging from the palms, making dappled shadows all around.

Charmed by the sight at the farm, they returned to their respective places, with the hope and resolve that if it could happen in Solapur it could in their place. The 200-odd palms in Deshmukh’s farm are proof that one can make the environment one’s ally in times of climate crisis.

Travelling by two-wheelers, buses and trains, the farmers came from drought-prone and arid zones namely, Gulbarga in Karnataka, Adilabad in Andhra Pradesh and Osmanabad, Beed, Amravati, Wardha, Yavatmal, Jalna and Nagar in Maharashtra. They hope that cultivation of date palms in their arid land would make them as financially sustainable as the farmers who have been growing them in Kutch.

The farmers who visited Deshmukh’s farm had one thing in common: all of them belonged to the arid parts that experience average rainfall between 350mm and 580mm and summer temperature reaching 45º C, the same climatic conditions as in Solapur. In May, the temperature in Solapur can peak to 47º C. As it falls in the rain shadow area, the average annual rainfall is about 510 mm.

“When I started date cultivation, people laughed at me initially and then ignored me. I was called mad,” 52-year-old Deshmukh told VillageSquare.in. “None had attempted this here. But now as people in large numbers visit me, the villagers are proud of my achievement.”

Date palm (Phoenix dactylifera) is a flowering plant species in the Arecaceae family, cultivated for its sweet edible fruit. Historical records mention that date palm groves in the country’s northwestern border developed from seeds discarded by army encampments and in part planted by settlers, returning from Haj pilgrimage. For over 400 years Mundra in Kutch served as the only sea route for Haj. 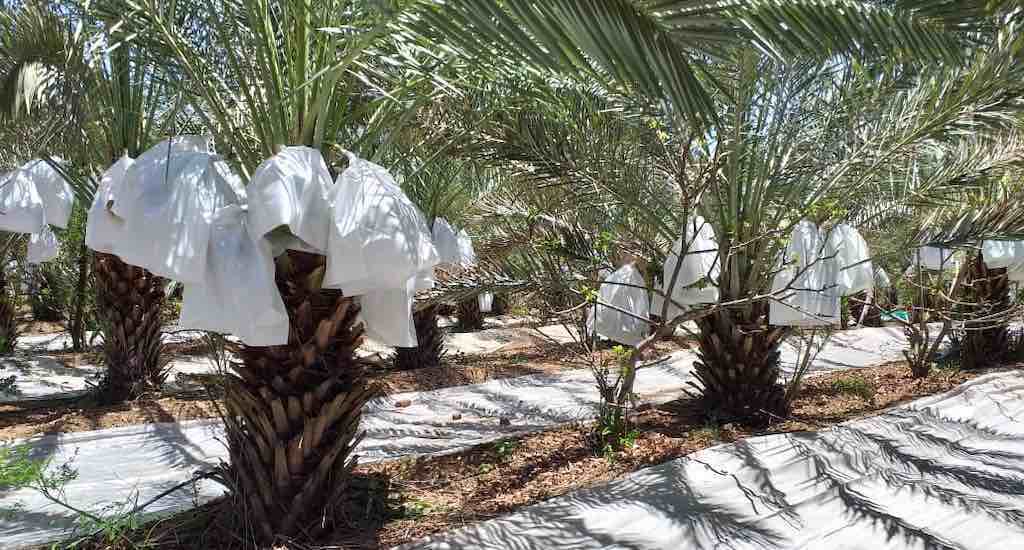 In course of time, the number of date plantations increased. Kutch, Saurashtra and North Gujarat are considered the best regions for date palm cultivation. Over several decades, the dates, commonly known as Kutchi kharek, have become an integral part of this landscape and culinary culture. Wedding ceremonies aren’t complete without the customary offering of dates to guests.

The mention of Arabian date palms in the private gardens of the ruler of Kutch was made by self-taught taxonomist and former curator of forest and garden of Porbandar State, Jaykrishna Thakar, in his book Kutchni Jadi Buttiyo (1927).

Before independence, Kutch, the largest district of Gujarat, was almost isolated from the mainland. It was only after 1947 that road and railroad connections came up and the marketing of dates improved.

Between 1980 and 2000, Jodhpur-based Central Arid Zone Research Institute (CAZRI) evaluated 18 cultivars of date palms and found that five were suitable for cultivation in India. Halawy, Barhee, and Khunaizi are suitable for eating afresh, while Medjool and Khadrawy are suited for preparation of dry dates.

Date palm is cultivated in arid and semi-arid regions that are characterized by long and hot summers, no (or at most low) rainfall, and very low relative humidity during the ripening period. This long-term crop, flowers between January and February and is harvested in June-July. 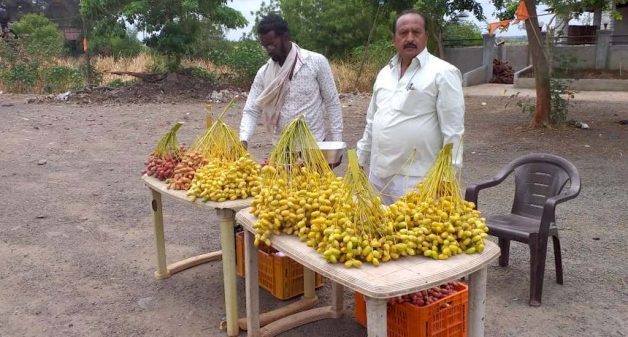 “The ideal mean temperature for flowering and fruit ripening in date palm is 25 °C and 40 °C, respectively. It requires rain-free conditions during the fruiting season particularly at the time of ripening of fruits i.e. between June and July,” P. K Paul, principal scientist, CAZRI, told VillageSquare.in.

The major date palm growing areas in India are Kutch, Rajasthan, and certain parts of Punjab, besides Tamil Nadu to some extent. “There is a good scope to grow it widely in hot, arid regions in Maharashtra, Karnataka, Andhra Pradesh and Telangana,” said Paul.

“Rajabhau insisted on growing them from seeds as TC saplings cost Rs 3,000 each. Since then we’ve been guiding him; this season we provided him with plastic bags to cover the fruit bunches in case of unseasonal rains,” Jignesh Thakkar of Ashapura Farms told VillageSquare.in.

As TC plants are priced between Rs 3,000 and Rs 10,000, farmers are averse to investing in them. They’d rather grow it from seeds as Deshmukh has done. The flip side is that the shape and size are inconsistent.

“Seed-raised plants do not guarantee true-to-type nature of mother palms and the character of progeny is unpredictable. TC dates have an advantage as they are more uniform in shape, size and are higher-yielding,” C. M. Muralidharan, principal scientist and head, Date Palm Research Station, Sardarkrushinagar Dantiwada Agricultural University, Mundra, told VillageSquare.in.

“Producing TC saplings is very complicated and it takes 4 to 5 years to generate them. Hence, it’s steeply priced,” said Muralidharan. “Moreover, only two firms are engaged in producing them.”

Guided by the belief that if one crop failed, the farmer could rely on the other, Deshmukh, a former civic corporator, has adopted mixed crop cultivation with grapes, passion fruit, custard apple, moringa, sweet tamarind and date palms.

As Solapur witnesses drought often, Deshmukh has made the best use of the conditions, to make a living through farming. Though date palms yield their first harvest in the fourth year Deshmukh had his first harvest six years after he sowed the seeds. “It continues to fruit for a period of 80 to 100 years,” said Paul.

Dates need more water, about 200lts a day. The water table of Kutch having plummeted from 350 feet in 2004 to 700 feet now, farmers have resorted to drip irrigation. “Between 2011 and 2013 Solapur experienced drought, so I couldn’t irrigate them but the palms survived,” said Deshmukh.

“In 2015 I made around Rs 40,000 and the subsequent three years I made around Rs 1 lakh per year but this year I have made Rs 5 lakh, harvesting around seven tons,” said Deshmukh, who has visited countries like Vietnam, Australia and Israel to know more about the latest in farming techniques, new crops, etc.

Deshmukh’s success with date palms has spurred farmers in Solapur, Angar, Akklakot and Mohol to take up date palm cultivation. He has a long waiting list for one-year-old saplings, including from the collector of Amravati district, who has placed an order for 10,000 saplings.

“Selling a sapling, priced between Rs 50 and Rs 70 each, will add to my kitty,” said Deshmukh as he joined a hawker, off the Solapur-Barshi Highway, to sell fresh dates from his farm.