Growing a variety of crops in different portions of a field, farmers in Nashik district have improved soil health and productivity, reduced diseases and seed-to-sale time, and boosted revenue 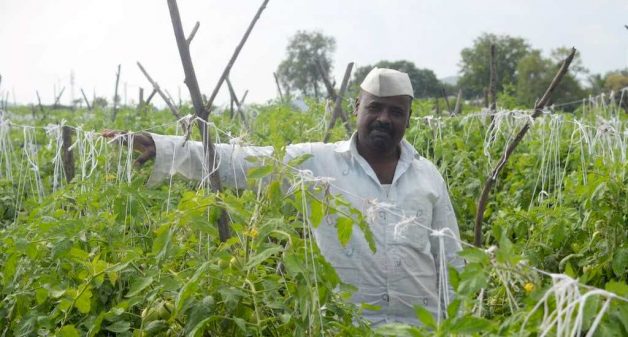 At the farm plot of Sanjay Valiba Shinde in Sonari village with rows of tomato plants trained to climb on strings, groundnut crop carpeting the black soil typical of the Deccan plateau, and the edges of the farm colored by marigold blooms that act as a barrier for pests, visitors are greeted with a cry of jai panch guntha.

Dressed in a white shirt with the Gandhi cap set askew on his head, the cap that most farmers in Maharashtra wear, the 45-year-old farmer of Sonari in Nashik’s Sinnar taluk offers an impromptu crash course on the merits of residue-free farming, farm-made plant-based pesticides and advantages of multi-cropping.

Shinde, who considered making a living from farming as one of drudgery and curse, now follows the principle of 5R farming. Having benefited from it, he greets people with the jai panch guntha salutation. Many farmers like Shinde are switching to the 5R technique of multi-crop farming, finding it lucrative.

In 5R farming, farmers plant three or more variety of vegetables in five sections of a plot, each measuring one guntha. Guntha measure is generally denoted by the letter R (one guntha is 1,089 sq. ft; 40 gunthas make an acre). Fifteen days after the maiden harvest, the farmer harvests the second crop standing on the other section. This continues after an interval of 15 days in other parts of the farm.

Following this technique, the grower is able to take the produce to the local market on a daily basis and earn between Rs 1,000 and Rs 1,500 or more, depending on the plot size. This is unlike the traditional method that takes a wait of six to nine months, from sowing to harvesting and selling of the produce.

“In the traditional method of farming which we followed earlier, we had to wait for a long duration before we saw cash in our hands,” Shinde told VillageSquare.in. “Multi-vegetable farming has tremendously changed our lives and we are no longer in perennial debt.”

The livelihood-enhancing experiment began with a meeting of the local farmers in 2010. Yuva Mitra, an NGO that has been working in Nashik district for over two decades, and which addresses issues like water resource development and management, livelihood enhancement, health and education, facilitated the meeting.

“The meeting was our attempt to understand their aspiration and, if possible, help enhance it. We realized that they were looking for a monthly income ranging between Rs 7,000 and Rs 8,000, which jobs like that of a bus conductor, a police constable or a peon in a government office offered, but which farming had failed to provide,” said Sunil Pote of Yuva Mitra.

“What if they could make Rs 1,000 a day just by growing vegetables but following a multi-vegetation pattern? This triggered the implementation of the 5R farming technique. In the beginning, we had some failures but over the years we have perfected it,” Pote told VillageSquare.in.

For six years, beginning from 2011, Yuva Mitra promoted 5R farming through its volunteers. For the last two years, the farmers are on their own, practicing and promoting it. Though farmers here have been growing vegetables since ages, an intervention like 5R farming has enhanced their livelihood.

The experiment which was initiated in Wadgaon village soon reached neighboring villages like Sonari, Sonambe, Sonawadi, Bhatwadi, Ashapur, and Dubere. Over the years it has brought in its fold 329 families, spread in 15 villages through which the canal water of Dev River courses.

The farming families here belong to Maratha, Mali, Vanjari, Harijan, Mahadev Koli, Kadadi, and Thakar communities. In each of the 15 villages, a Water Users Committee manages the upkeep and maintenance of the canal.

5R farming is based on the principles of companion planting that maximizes the use of space and creates a congenial habitat, leading to increased crop productivity. For instance, a farmer could raise brinjal, fenugreek, broccoli and pumpkin in a plot, while concentrating on cabbage, dill, cherry tomato and gourd in another.

The technique controls and minimizes the intensity of diseases and pest attack. As the vegetables are from dissimilar families, they absorb nutrients from different zones of soil and help maintain fertility. They reduce expenses on fertilizers and pesticide.

As harvests are small, they are resilient to market fluctuations. With family members undertaking the sowing and harvesting, and the farmer selling directly in the mandi, he eliminates the role of middlemen. Most importantly, it brings in cash every day.

Anna Narayan Kotkar of Wadgaon is a class 12 dropout. He is building a bungalow for Rs 30 lakh, adjacent to his decrepit ancestral house. He grows garlic, cabbage, wheat, onion and a variety of vegetables including exotic ones in his 6-acre plot. “Multi-vegetable farming has ushered prosperity to our lives,” he told VillageSquare.in.

Having met scores of farmers, either in their fields or sharing cups of herbal tea in their bungalow homes over the course of this assignment, this writer came across happy families exuding a sense of confidence, brimming with hope of better times and feeling dignified about farming.

While the present-day farmers are either school dropouts or had discontinued their studies due to paucity of funds, their sons and daughters pursue studies in science, engineering, pharma, horticulture and the like, given their improved financial status.

Karbhari Sangle, belonging to a family of farmers from Wadgaon village, and a graduate in arts, was among the earliest to adopt the 5R farming technique. He went on to establish Devnadi Valley Agricultural Producers Company, Maharashtra’s maiden farmer producer company (FPC), that has 850 farmers from 20 villages as shareholders.

The Devnadi FPC markets vegetables, fruits and farm inputs. The other vegetable growing FPCs include Mhalungi Nadi with 450 members and Green Vision with 735 members. In fact, with a total of 15 FPCs, Sinnar taluk in Maharashtra leads the count.

“It’s been eight years since I adopted the technique on an acre and I have mobilized hundreds of farmers to do the same,” Sangle, proponent of 5R Farming, told VillageSquare.in. He grows exotic vegetables as well as traditional crops such as onion, groundnut, wheat and pearl millet.

“Exotic vegetables like Chinese cabbage, broccoli, Thai basil, zucchini, thyme, etc. get me four times the price of tomatoes I grow,” said Sangle. “In fact, I’ve told my son to stop looking for a job, and assist me, and that I would give him a salary of Rs 50,000.”

Considered an affluent farmer, Sangle, who is in his early fifties resides in a two-storied house and manages his six-acre farm single-handedly, with his civil-servant aspirant son and school-going daughter helping him occasionally. He has customers in cities like Mumbai, Pune, Hyderabad and Vijawada.

Be it Indian or exotic vegetables, plant nurseries play an important role in ensuring availability of high-quality planting material for the farmers practicing 5R technique. Vinay Hagawane (28), a horticulture graduate who set up a nursery in 1.25-acres in 2017, caters to farmers in 20 villages.

“A sapling, depending on its variety, could take between 15 and 35 days to grow and be hardened before it is transplanted,” Hagawane told VillageSquare.in. “In the last six months, I have sold around 70 lakh saplings of both Indian and exotic vegetables.”