How some FPC balloons can become durable high flyers – III 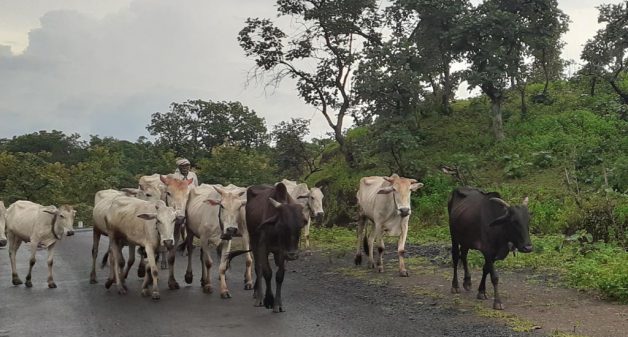 India has around 35 million pastoralists who graze cattle in forests, grasslands and grazing lands. Different pastoral communities have different traditions. Some are seasonal migrants while many migrate year-round with their family members and animals.

Many consider pastoralist lifestyle as outdated. But through meat and dairy products, pastoralists contribute significantly to the economy. They are custodians of traditional animal breeds and conservers of traditional cultures, music and crafts.

One such pastoral community is Nand Gawali that has settled in and around Bor Forest in Wardha district of Maharashtra. Their main source of income is pastoralism; agriculture contributes further to their livelihood.

With shrinking grazing lands and restrictions on grazing cattle in forest land, Nand Gawalis find pastoralism unviable. The custom of farmers paying pastoralists is also disappearing. This has led to many pastoralists quitting their traditional lifestyle and shifting to alternate livelihoods.

A research study was conducted in five villages, namely, Chandani, Danapur, Gumgaon, Panjara Bondi and Talegaon Raghuji, of Wardha district, to understand the pastoral practices of Nand Gawali community and their access to the forest for grazing. The villages are located in the buffer zone of the forest.

Gunwantrao Atmaram of Chandani village, possesses 22 cows and 10 buffaloes. All his cattle are of indigenous Golao breed. He is a third generation Nand Gawali continuing the pastoralist tradition. Rearing 32 animals is not an easy task, he said. His day starts at 4 am, with milking of the cows and buffaloes. Then he takes the animals to graze in the forest grassland.

After grazing the animals through the day, he returns by dusk. Along with herding, he looks after the crops in his 5-acre land. Due to the proximity of the village to the forest, villagers have to deal daily with the menace of wild boars and nilgais destroying their crops.

Atmaram’s younger son is enrolled in the nearby high school while the other is in his 2nd year of graduation. His daughter is married and lives in Nagpur. Atmaram lamented that none of his sons is interested in grazing the animals or looking after them.

He grazes the animals by himself or hires a local laborer. Often he has to stall-feed his livestock. His wife helps him by preparing supplementary cattle feed for the lactating cows, and other such works.

During the seasonal migration period of February to June, Atmaram and other pastoralists travel more than 20 km along Wardha River with their animals. A few years ago, the whole family used to accompany him, but now he travels with the other members of the community.

The age-old practice of seasonal migration for fodder is changing rapidly for Nand Gawalis. Many of them used to hire laborers during migration; but with other lucrative livelihood options available in and around their village, workers are no longer available for hire. Absentee herding and sedentary pastoralism are a growing phenomenon.

The custom of farmers paying pastoralists to graze on their farmland has disappeared at the migrated places. Villagers complained that the availability and quality of fodder in the migrated areas have decreased of late and they had to purchase fodder from landowners to feed their cattle.

The families return to the villages before the start of monsoon. For the rest of the period, they sustain their cattle by grazing the animals in the forest grazing land, as well as by feeding crop stubbles.

The community takes pride that once the number of livestock was more than double the village population; and that they exported ghee and khoa to Manchester in the United Kingdom. But the scenario has changed.

Changes in fodder availability in the forest, as well as migrated places, have affected livestock number. Many families have reduced the number of their livestock on purpose. In Danapur village, Gajanan, a Nand Gawali who owns 10 cows, recalled how a few years ago, he possessed more than 50 cows and buffaloes.

Of late, the maintenance cost of livestock has increased substantially. Though the market price for milk and dairy products has increased, with the absence of a formal market channel and the presence of middlemen, it is just break-even for the pastoralists.

Frequent droughts have also affected the pastoral community. The pastoralists said that more than 50 animals had died last summer due to lack of water and fodder. Families are shifting from agriculture and livestock rearing to other lucrative livelihoods outside the pastoral sector.

Under the Forest Rights Act (FRA), more than 1,000 ha was incorporated under the forest. Villagers have been given the right to access the forest. However, pastoral communities have not been recognized under the FRA.

Further, FRA has so far recognized individual rights over the forest but has ignored the Community Forest Rights in Wardha district. Forest area is being expanded without considering the rights of people dwelling in the buffer region of the forest.

The tradition of conserving grazing lands is no longer practiced. A villager said that parthenium plants have invaded common as well as private lands, reducing the grass available for animals. The alien species, Cassia tora, is present in huge quantities on the grasslands. READ: Land rights on pastures empower deprived communities

Migration and constant mobility in pastoral lifestyle are considered as adaptive mechanisms to deal with climate vagaries. However, because of a combination of reasons mentioned above, age-old customs are changing. It becomes imperative to understand pastoral ecosystems and develop institutional programs to enhance the livelihood security of these communities.

Rashmi Komal is a researcher at VikasAnvesh Foundation, Pune. Views are personal.