An existing interactive voice response system was refashioned, enabling migrant workers in destination cities get messages regarding their circumstances across, subsequently facilitating their return 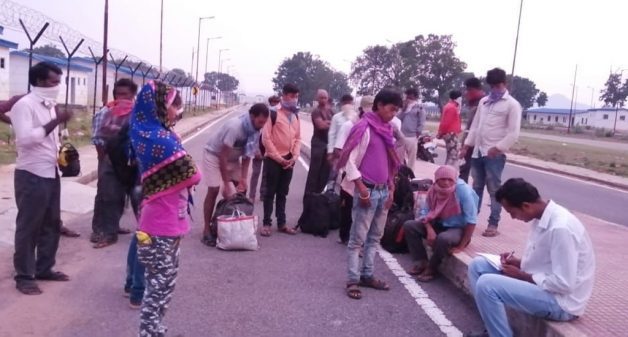 Madan Yadav was among the many migrant workers from Chakai administrative block in Jamui district of Bihar who were stranded in destination states. They had been hoping to return to their native villages by the end of the lockdown which came into effect on 25 March.sexyxxx.ccsexyxxx.cc

“For 10 days we had no food. We spent whatever money we had on getting food items and it is over now. We have no way of returning home,” said Yadav, who was stranded in Surat. Yadav’s is one of the many messages that migrant workers left on the CHIRAGVaani helpline after the pandemic-induced lockdown began.

CHIRAGVaani, introduced originally as a community media platform as a tool to address local issues, was refashioned during the COVID-a9 pandemic. It enabled villagers such as Madan Yadav stranded in other states, to seek help in getting back home.

In October 2019, the research wing of Professional Assistance for Development Action (PRADAN), a grassroots organization, and partner organizations launched Creative Hub for Innovation & Reciprocal Research & Action for Gender Equality (CHIRAG), to bring about food and nutrition security and gender equality in the states of Bihar and Odisha.

Located in Chakai, the Santhal dominated administrative block, one of the key aims of the project was to set up an interactive community media platform, called CHIRAGVaani. This Interactive Voice Response System (IVRS) was set up in collaboration with Gramvaani, a community-powered media platform, to respond to community needs.

During the lockdown, CHIRAGVaani was refashioned as a helpline, so as to address the needs emerging from the pandemic. The helpline spread awareness about the pandemic among callers. It enabled callers to record their questions and issues on the IVRS platform.

A poster about the helpline and the phone number were widely distributed among communities in Bihar and Jharkhand where PRADAN works, particularly in the Santhal Parganas region. The helpline started receiving calls from residents across these areas and especially outmigrants from Chakai.

During the first phase of the lockdown, the migrants’ issues were largely focused on not having access to rations. In her recorded message, Surili Soren said that they were not getting rations properly and were facing a lot of difficulty in getting food since they were not allowed to leave home.

“We want to inform the government that the Nawadih panchayat has five ration stores but none of them is giving rations. When we take our ration cards and go to the shop to collect provisions, they say they have not received anything yet,” said Jagat Singh, in his message.

After the announcement on 13 April to extend the lockdown, migrant workers from Bihar and Jharkhand recorded an increasing number of messages. Stranded in faraway cities such as Surat in Gujarat, Ghaziabad in Uttar Pradesh, Tirurkad in Kerala, and Mumbai, the lockdown left migrant workers vulnerable.

“Now hearing that the lockdown has been extended till 3 May, we don’t know how to continue staying here. Neither do we have anything to eat nor anything to drink nor do we have money. We have nothing. So how will we survive?” was the message from Lalu Yadav in Surat.

As the lockdown continued, the increasing number of recorded messages on the CHIRAGVaani number revealed the helplessness of migrant workers. During the first lockdown there were 15 calls, whereas after the announcement of the second lockdown there were 24 calls.

Each of these calls was made by one worker on behalf of groups ranging between five and 30 workers. Most workers recorded that they had run out of money and food, leaving them with no avenues to make ends meet or return home.

Sanjiv Yadav, who called on 14 April, more than two weeks since the lockdown began, said “We have nothing to eat. We have been hungry for 10 days, we just drink water to survive. We have no money, no food. What is the point of staying alive. If we don’t die of corona we will die of hunger.”

Support through the platform

CHIRAGVaani was able to connect some migrant workers with helpful resources. For instance, after Santosh Yadav who was stranded in Mumbai left a recording on CHIRAGVaani, the team helped him contact a Mumbai helpline. The Mumbai helpline arranged for rations that included rice, wheat, dal and vegetables like potatoes and onions.

Beyond struggling for food, most migrants emphasized the desire to return home and expressed disappointment with the repeated extension of the lockdown. Some workers stranded in states like Odisha and Kerala discussed unfamiliarity with their surroundings that appeared to impede their access to services, leaving them unaware of helplines, and also intensifying feelings of isolation.

After travel restrictions were lifted and recordings on CHIRAGVaani reduced, in May and June the team followed up with workers who had previously called. Those who were able to return home were already preparing to travel back to the cities, while the few unable to return to Chakai had no option but to resume work in the cities.

A recent IVRS survey by Gramvaani in Bihar, Jharkhand and Madhya Pradesh found that more than 30% of the workers reported that Mahatma Gandhi National Rural Employment Guarantee Scheme (MGNREGS) work had not started in the villages. Some of the returned migrants confirmed the same, indicating no local livelihood.

Although the lockdown had shattered their trust in the city, contrary to initial reports, the dearth of work opportunities in villages and the helpless financial situation in their homes left workers in need of additional income with no option but to eventually return to cities.

As they return to the cities that render them invisible, helplines such as CHIRAGVaani can play a crucial role not only in providing them support during exigent circumstances, but also in giving them a forum to access benefits and have their voices heard. Including migrant workers’ voices and acknowledging their struggles in the redefinition of normalcy is crucial, to recognize their rights to move freely for work.

Arundhita Bhanjdeo, who has a doctorate from Charles Sturt University, Australia, is a researcher at PRADAN. Ayesha Pattnaik, who holds a masters in sociology from London School of Economics, is a research associate at PRADAN. Views are personal.