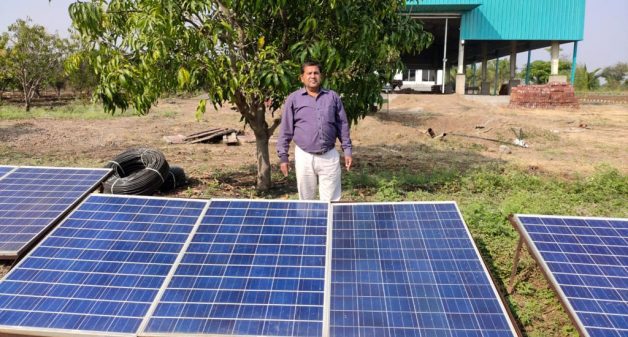 Uninterrupted power supply and lower rates at night are the twin things every farmer wishes for. Gitaram Kadam of Nhavare village in Pune district has achieved it in his own way. He has turned aspirations into reality with his efforts and in the process has become an off-grid farmer.

“I was totally frustrated of being unable to irrigate the fields at regular intervals because of erratic power supply, load shedding and getting only a single phase supply often,” said 49-year-old Kadam, a mechanical engineer. He worked with a Pune-based multinational manufacturer of switch gears, till he took up farming recently. “The situation forced me to take matters into my hands so that I could ensure regular yields.”

Kadam’s village Nhavare, is one among the 117 villages comprising Shirur taluk. It has a total population of 7,429, as per Census 2011. Like most villages here it receives less than 500 mm rainfall annually, making it a dry and semi-arid zone. The monsoon rain plays a critical role in the sustenance of agriculture as the food grains and other crops are cultivated predominantly under rain-fed condition.

To ensure regular power supply, in July 2016, Kadam set up a solar panel at a cost of Rs 1 lakh. He then added a wind turbine, both in the premises of his 5-acre farm. “I didn’t want to depend on only one source of renewable energy and intended to have a hybrid energy model. I was confident of recovering the cost I incurred over three years of power bills.”

The uniqueness of this wind turbine is that it was fabricated by students. It was facilitated by Kadam-run Gramin Tantragyan Sanstha (GTS) or Rural Technology Development Center and Vigyan Ashram, a center of Indian Institute Of Education (IIE), Pune. Both the non-governmental organizations are involved in rural empowerment, skill development and creating entrepreneurs.

“We, a group of 20 students, comprising of diploma holders, undergraduates and post graduates worked on it for two months under the guidance of Jorge Ayarzo,” Shubham Shembade (24) told VillageSquare.in. “But for the copper wires and magnets, we used scrap or recycled materials. I worked on the blades made from Deodar tree wood.”

“We built the turbine with a group of students during a 3-week workshop. It is an open source design based on a Hugh Piggott model,” Jorge Ayarza, the founder of Puducherry-based Minvayu that works on decentralized rural electrification, told VillageSquare.in. “But in the case of Nhavare, we modified it to run a water pump. It runs directly to a 3 phase submersible pump.”

The 20m tall and 3 kilowatt windmill’s generator too was assembled – bringing down the cost by half. Its body was epoxy-coated to make it waterproof. It was equipped with telepost balancing governor, which controls the wind speed and direction.

“Besides making me energy self-sufficient, it frees me from depending on the state for my power requirement and reduces my carbon footprints,” said Kadam, elaborating on the benefits of using renewable energy, more so the wind-solar hybrid model. “The power utility need not spend on laying of power lines and erecting electric poles and lastly, I avoid highly polluting diesel generators to draw water.”

Kadam is not only an off-grid farmer but a social entrepreneur. He has advanced a successful and workable model in GTS which has considerably reduced rural migration of youth to cities by upskilling them and creating new entrepreneurs, according to Arvind Shaligram, CEO, of Research Park Foundation established by Savitribai Phule Pune University.

In 2000, Kadam, then in his late twenties, established GTS in Nhavare village. The center offers basic technology courses on skill enhancement with duration ranging from three days to six months in varied subjects from plumbing to welding, from poultry to fabrication, from water testing to setting up a biogas plant.

Youth, both boys and girls, from villages and urban settlements from a 250 km radius avail of the courses. “Like most villages in Maharashtra, here too the educated ones try their prospects in landing a government job,” Kadam told VillageSquare.in. “Their uneducated brethren take menial jobs or migrate to urban centers to secure a better livelihood.”

Given the success of Kadam’s venture, in the last two decades since its birth, GTS has gathered affiliations from leading institutions such as Nehru Yuva Kendra Sanghatan (NYKS), Pune University and Mahatma Phule Agriculture University.

“In the 20 years since he began, Gitaram has emerged as a leading social entrepreneur in the state, training youth in all sorts of rural-based technologies and also establishing himself as a rural entrepreneur,” Yeshwant Mankhedkar, deputy youth officer, NYKS, Pune district, told VillageSquare.in.

In 2013, Kadam started Anandghana Industries, a food processing unit in Kedgaon. Anandghana manufactures 12 types of vegetable, fruit and grain powders, such as dehydrated garlic powder, dehydrated lemon powder, dehydrated beetroot powder, sorghum flakes, etc. Over the years it has acquired a huge client base in Pune and elsewhere.

Additionally, he has developed a linkage which benefits rural women by creating the Sundarban Food Processing Cluster (SFPC) in association with Khadi & Village Industries Commission. It has been instrumental in the spawning of 400-plus women entrepreneurs who collect vegetables and fruits from farmers in 38 villages.

After cleaning and solar-drying them, the women check the vegetables’ moisture content, and deposit the same at the clusters in four taluks. From the clusters, the dried vegetables are forwarded to Sundarban AgroFood Processing Company for final processing and packaging. The products are marketed under the Anandghana brand.

Each farmer is bound to follow natural farming techniques and is equipped with a solar dryer and moisture meter acquired through monthly installments. The linkage has a huge impact on the livelihood of rural households.

“A woman farmer who sold a bunch of spinach for Rs 5 is able to get Rs 50 when she supplies the produce after cleaning, grading and drying,” Kailas Kamble of agriculture process engineering department, Mahatma Phule Agriculture University, Rahuri told VillageSquare.in. “The women are now making between Rs 12,000 and Rs 15,000 every month.”

Kadam believes that the model of grower, who becomes an entrepreneur through value addition, combined with a marketing chain created by local businesses can free the farmer from the stranglehold of the subsidy regime and usher in an enhanced livelihood of rural households.