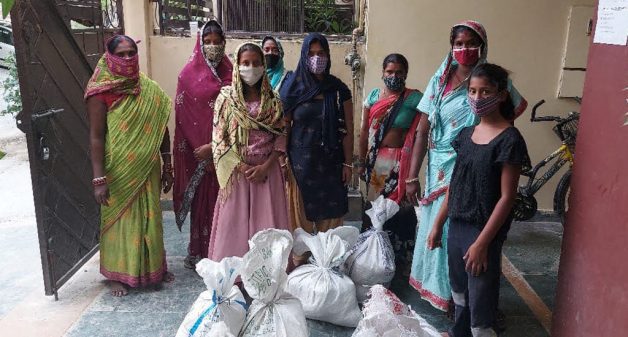 Asha Devi, a 50-year-old woman, has been living alone in the Naipura slum of Loni, Uttar Pradesh for the last 15 years after getting her two daughters married. She described the lockdown as more menacing than the coronavirus itself. Because of the lockdown, she could not continue to make cushions that earned her Rs 40 a day.

With the second wave of the pandemic proving to be far more virulent and dangerous than the first, coupled with the trajectory of unemployment due to the lockdown, food remained the concern of marginalized people like Asha. Their immediate need was to overcome hunger as well as to fight the pandemic.

Just when Asha Devi was losing hopes of getting food, a non-profit organization came to her locality and distributed dry ration kits that would last a month. A month’s worth of dry ration was enough to sustain her till she got back to her job after the easing of lockdown.

Anjuman Bibi, a 45-year-old woman has a similar story. Nearly 15 years ago, Bibi and her husband Mohammed Salim had left their home in Jharkhand and came to Noida with a hope that the giant city would offer them a well-paid job.

But they ended up settling as daily wagers and they had to live in the slum. Mohammed Salim used to sell handmade toys on the roadside which brought him an income of Rs 200 a day. With two daughters and a son, he feared how to feed his family when the lockdown began.

“It is unlikely for anyone to feel our pain unless witnessed. I used to work as a domestic help. But fearing the spread of coronavirus, my employer asked me not to come,” said Bibi. “We are migrants and we do not have any support system here. Who will help us?”

The pandemic has brought multiple hardships for the informal sector workers. The loss of income, acute food shortage and limited access to healthcare during the pandemic have amplified the deep-rooted disparity. This is telling when India is ranked 94 out of 107 countries, according to the 2020 Global Hunger Index Report.

The State of Food Security and Nutrition in the World Report 2020 revealed that India has the largest population of food-insecure people in the world. The report also mentioned that the prevalence of food insecurity increased by 3.8 percentage points in India between 2014 and 2019.

It is obvious that more people would face acute food insecurity during the pandemic. During the first phase of COVID-19, migrant laborers made headlines. But this time, vaccines and oxygen cylinders have overtaken that space. Thus, the unmet need for food among the poor remained mostly unattended.

In Noida slums – An unfolding disaster, a rapid assessment report of 70 slums in the Noida area conducted during the second wave of the pandemic, the NGO Atmashakti Trust found that 40 to 50% of residents had returned to their villages.

Around 7,000 families chose to stay back. They were daily wage earners, auto and rickshaw drivers, ragpickers and domestic workers. The pandemic has worsened these slum dwellers’ vulnerability. According to the Economic Survey of 2018-19, almost 93% of the total workforce in our country is informal and over 22% of India’s total population (65 million) lives in urban slums as per Census 2011 data.

Last year, the union Finance and Corporate Affairs Minister Nirmala Sitharaman announced that the PM Garib Kalyan Anna Yojana  would provide an additional 5 kg of food grains per person and 1 kg of dal per family free of cost every month for 800 million ration cardholders under the National Food Security Act. But migrant informal workers who live in temporary sheds, could not avail of it due to lack of necessary documents.

Aashiya, a 10-year-old girl living in a slum near Noida was doing her homework while her parents worked in a relief packaging center in the Atmashakti Trust’s office. Aashiya’s parents have been living in the slum for over a decade. Her mother used to work as a house help while her father was a rickshaw puller.

Their financial condition was already bad from last year’s lockdown. During the second wave they spent whatever small savings they had. Seeing their distress, Atmashakti included them in the Food for Work program, an initiative to help families who could not earn due to the lockdown.

Atmashakti was carrying out relief works in the Noida settlements under Mission Rahat – rahat translating as relief. Food for Work became a part of their COVID relief work. Twenty-six households benefitted through this Food for Work program.

Under the Food for Work program, Aashiya’s parents had to pack 400 ration kits. And in return they received a dry ration kit for one month. The initiative not only ensured the food security of the family but also made them contribute meaningfully to the COVID relief work.

“During the second wave, the number of people needing food assistance swelled up. We decided to intervene, as we were aware that not much support was coming for the slum dwellers. Loss of income and food insecurity was making them more vulnerable,” said Ruchi Kashyap, executive trustee of Atmashakti Trust.

“Our idea was to ensure that no one was left behind, and the marginalized communities were supported at the earliest,” said Kashyap. “Our efforts have benefited over 8,000 families in Noida slums under the Mission Rahat campaign.”