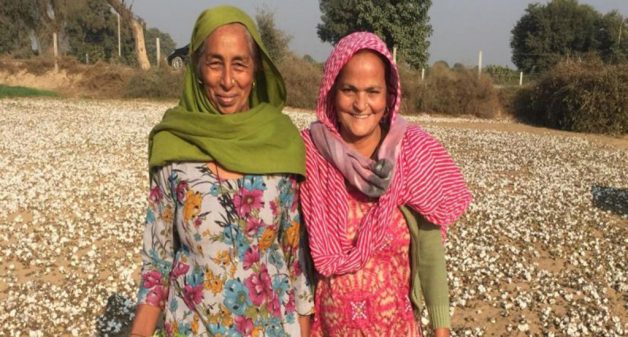 In the late 15th century, much before India’s environmental laws were formed, 34-year-old Guru Jambeshwar from Nagaur, in present day Rajasthan, laid down 29 tenets for a new sect that he had founded – Bishnoism. Eight of them focused on protecting the region’s wildlife and its thick green cover. Since then, the Bishnoi community has been fiercely preserving the environment.

The Bishnois are environmentalists by tradition. They bury their dead instead of cremating them to restrict unnecessary chopping of trees. They use only dead trees as fire wood and for making furniture. This vegetarian sect with an estimated population of close to 10 lakh is concentrated in Western Rajasthan, Punjab, Haryana and Madhya Pradesh.

In Bazidpur Bhoma, a village in Fazilka district of Punjab, just on the border of Rajasthan, the Bishnoi community has steadfastly stuck to their sustainable indigenous cultures. Here their eco-friendly social practices have continued over many generations. This formerly arid land is now home to around 3,500 people, who have turned their lands lush and bountiful.

One of the most significant reasons the community has strived to preserve the groundwater levels is to protect their sacred khejri tree (Prosopis cineraria) that grows in a short period and is vital in maintaining the ecosystem of dry regions.

“Khejri trees add immense nutrient value to the soil and ensure a good yield. The crops grown in the periphery of these trees are also protected from microbial infections and diseases,” said Ajay Pal Bishnoi, a renowned conch shell blowing practitioner from Bazidpur Bhoma. “The dry barks of the trees have great antibacterial properties when burnt as firewood for cooking,” he said.

“The green leaves add a lot of oxygen to the air and are rich in lactic acid. The tree produces very nutritious fodder for our cattle. All of this tree’s parts have some or the other medicinal value. In addition, we prepare a local dish called sangri from its fruit on special occasions,” he said.

The efforts of the community to save the khejri have continued through the ages. In September 1730 AD, Maharaja of Marwar, Abhai Singh’s men reached Khejarli village near Jodhpur to cut down khejri trees to construct his new palace. In protest, 363 Bishnois laid down their lives by hugging these trees as a way to protect them. This inspired the famous Chipko Movement of the 1970s.

Now the khejri trees appear to be in danger once again. A 2015 report by the Central Arid Zone Research Institute (CAZRI) claimed the fast decline of khejri trees in Rajasthan was due to indiscriminate groundwater use.

In Punjab, the low water table level is credited to the green revolution induced practices of transplanting rice three or four times a year. This conventional practice requires flooding of fields for almost three continuous months by pumping out the groundwater through tube wells.

To control this, the state government passed the Punjab Preservation of Subsoil Water Act in 2009, restricting farmers from planting paddy before the notified dates. The farmers breaching the law are liable to pay a penalty of Rs 10,000/hectare/month.

“However, the government continues to promote excessive pumping of groundwater by often providing 100% subsidies on electricity and water bills,” said Naveen Poonia (27), a former photographer who now works full-time as an agriculturist in his ancestral fields in Bazidpur.

Well aware of how the green revolution has been impacting ecosystems through the rest of the state, Naveen Poonia, like others in his community, decided to grow their native rice variety called Jonna instead of the water-guzzling hybrid types found across Punjab. Even that is planted only once a year closer to the monsoons, therefore, reducing their dependence on groundwater.

“If we ever need to use the groundwater, we only have to dig 30-40 feet down, unlike the rest of the state where one has to go as deep as 140 feet. Moreover, one has to use a lot of fuel such as diesel or hydroelectricity to pump this water out,” he said.

Given climate change and erratic rainfall patterns, it might be impossible to replenish groundwater at this depth. Moreover, when pumped out, this deep underground water severely affects soil fertility and damages the old-growth trees as it’s rich in salts.

For Bishnois, cotton is a significant crop. They continue to grow the native variety without using chemical pesticides. The community uses cotton thatches for building houses and cooking purposes. Burning of the stubble is strictly prohibited in the village. Though the yield is less, it gets a 50% higher price and involves no use of chemical pesticides compared to the widely used hybrid variety

The practice of intercropping with water-resilient crops such as kinnow, mustard, sesame, grams, maize and pearl millet has been consistent among Bishnois. They generate more profits through the cultivation of multiple crops, enriching their soil in the process.

Despite not being highly profitable, the community continues to grow traditional crops instead of cash crops to support the village’s local economy. “If we grow non-native crops such as paddy, it will have a dangerous effect on our natural ecosystem,” said Kalawati Devi (58), a Bishnoi woman from Bazidpur.

“We would also need to hire laborers from other states such as Bihar who can cultivate paddy. Then the underprivileged people of our community, particularly women, who rely on agricultural wage work for livelihood will be forced to migrate. This is how our social system works,” said Devi as she, like her fellow land-owning farmers, hires local women for cotton cultivation.

These sustainable social systems are being carried forward by the youth who have returned to Bazidpur to work from home during the pandemic. The young professionals are combining traditional knowledge with contemporary interventions that save water and effort.

They are developing intercropping practices that will utilize the soil better and yield more profits. Puneet Poonia (36), a software engineer, who has been working remotely from Bazidpur since March 2020, has been successful in experimenting with the cultivation of broccoli, beetroot, and plums through intercropping.

“We try to store whatever water we get from the government for agricultural purposes and rotate our crops in such a manner that no additional groundwater is used. We have also switched to drip irrigation wherever necessary, to preserve water,” said Puneet Poonia.

Like other young returnees, Puneet Poonia aspires to continue the Bishnois’ sustainable practices through innovative approaches. “Along with declining groundwater, its quality has degraded too. So we have started digging underground tanks to preserve the rainwater for drinking. The government is providing subsidies for some of these sustainable practices,” he said.

In order to keep the harvested crops for a longer duration, most houses in the village have traditional inbuilt storage facilities with natural temperature regulating and pest control mechanisms. Thus the community is also empowered to hold on to their crops for longer durations instead of selling at the ongoing demand prices set by middlemen.

As the community keeps progressing with the practices centered around resource conservation, one of their challenges remains a lack of market linkage for the traditional crops, which are not listed as cash crops by the government.

Mani Mahesh Aurora is an independent journalist based in Uttarakhand. Views are personal.