Farmer producer companies have started to play an important role in procurement from smallholders, which guards against price crashes that has been plaguing marginalized farmers across the country despite record harvests 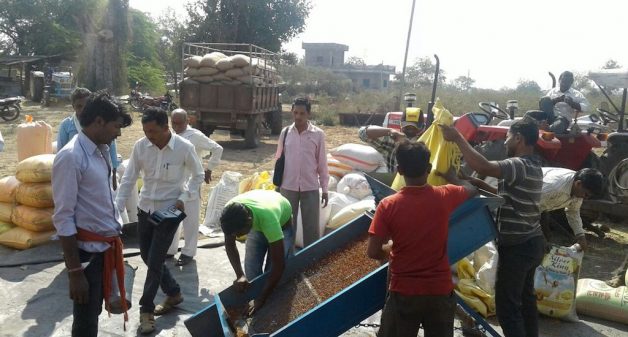 Procurement of produce is in progress at a market yard. (Photo courtesy MAHAPFC)

The agricultural seasons of 2016-17 (Kharif and Rabi) have not been favorable for farmers across the country. In spite of the near-normal monsoon rainfall in India in 2016 coupled with record farm production, wholesale and retail prices for agricultural commodities have been depressed for most of the year.

The uncertainties associated with the government announced minimum support price procurement (MSP) operations have added to the farmers’ woes. Added to this scenario is overall desperation and gloom in the countryside, leading to an increasing number of farmers’ suicides in Madhya Pradesh, Maharashtra and even in the northern Indian states of Uttar Pradesh and Punjab. Also see: Telangana’s tur dal farmers face yet another uncertain season, Marathwada farmers face bleak sowing season

Amidst this worrisome situation, a few examples of collective action shine as beacons of hope. The MAHA Farmers Producer Co. Ltd (MAHAFPC), the apex organization of over 200 farmer producer companies in Maharashtra, is a case in point. In the recently concluded procurement season, MAHAFPC did business of over Rs 1.68 billion. This was the first year of business operation of MAHAFPC.

The organization was designated by the central government as the lead agency in Maharashtra along with National Agricultural Cooperative Marketing Federation of India Ltd (NAFED) and other government agencies to procure red gram under the Minimum Support Price (MSP) program of the government. The MAHAFPC took up this challenge in all earnestness and ensured that all its members (the producer companies) and in turn their members benefit from active participation in the MSP procurement.

The role of MAHAFPC is commendable because it is acting as an aggregator of aggregators. While the individual FPCs are close to the farmers and are often the first point of contact with their members in diverse locations, MAHAFPC acted as an apex organization that aggregated the demands of the members, their members being individual FPCs.

While individual FPCS catered to an average of 300 to 500 farmers in their area of operations, the economies of scale that an aggregator brought was the value addition as an apex. MAHAFPC was effective in coordinating national organizations such as Small Farmers’ Agri Business Consortium (SFAC) and establish linkages with the departments of the state and central governments.

The MAHAFPC and its outreach indicated that it catered to the needs of the smallholders. With the value of about Rs 1.7 billion of procured commodities from 26,800 farmers, per farmer commodity procured was of Rs 60,000. In volume, it meant that of the 332, 270 quintals of produce from 26,803 farmers. It averaged about 12 quintals per farmer. These numbers show that small farmers could participate in the MSP operations only because they had someone representing them in the market, namely the FPC they were members of. In 50% of the cases, the procurement centers had mechanical cleaning and grading facility that ensured that only certain fair accepted quality (FAQ) produce was procured.

There is another story beyond these numbers. When the state government had announced MSP operations, the state machinery was not adequately prepared to receive the huge quantities of tur dal (red gram). As a result, there were long queues of farmers waiting for close to seven days outside the government market yards, waiting for their turn to come in for selling their produce. Contrasted with this scenario, the farm gate procurement arrangement made by members of the MAHAPFC was a boon to the farmers. 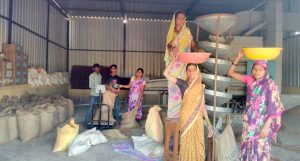 Farm produce is being graded and weighed during procurement. (Photo courtesy MAHAPFC)

One of the noteworthy features of the role of MAHAFPC was that it covered a large number of districts from Chandrapur and Yavatmal in the eastern part of Maharashtra to Ahmednagar in the west. The procurement covered districts of Vidharbha and Marathwada that had consistently reported distress. Districts like Sholapur, Ahmednagar, Beed and Osmanabad that are perennially draught-prone also figured in the procurement of pulses.

The credit of such a diversified procurement goes to the dispersed presence of farmer producer companies across the state. The decentralized approach thus ensured that not only farmers from resource-rich regions benefited from the MSP operations, but also ensured coverage of otherwise marginalized districts.

A noteworthy feature of the management of MAHAFPC is the team of young educated farmers who are steering the organization. Yogesh Thorat, Managing Director, is one of the key promoters of one FPC in Ahmednagar. He is also the lead person in the formation of the apex organization. A graduate in agriculture and postgraduate in management, he represents the new face of farmers, those who have close connections with the community but are also linked to the changing dynamics of the market.

In a daylong meeting organized in Pune in June this year, MAHAFPC brought out a detailed note titled the Pulse of Agribusiness. The note reviewed its performance of the procurement season. There was a brainstorming session with all the board members and representative of the FPCs. This author was present in that meeting.

It was a refreshing sight to see the members of the FPC debating about the future of the organization and what other business activities that they could undertake in the coming season. They looked at the national and global scenario in agriculture and how and what opportunities could be tapped by them in this scenario. Experts from the agriculture ministry were invited to guide the board members. It was a meeting that was organized for a purpose and was managed like any other professional business meeting of a corporate entity. 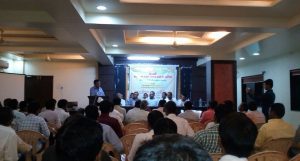 A meeting of MAHAFPC that was held recently in Pune, Maharashtra. (Photo courtesy MAHAPFC)

Lessons for the future

MAHAFPC’s work offers valuable lessons for both the government and the farming community. There is no alternative but to invest in organizing and building institutions of small and marginal farmers, if they have to be supported. If small and marginal farmers have to link with input and output markets, there does not seem to be an institutional mechanism except cooperatives and newly engaged farmer producer companies.

Unfortunately, most of the cooperatives, even in the developed states of the country, have become highly politicized, and their leadership is more aligned to promoting their political agendas rather than taking care of their members’ interests. Hence, FPCs are possibly the only institutional alternative left who have the potential to act as true representative of small and marginal farmers.

The recently concluded procurement operation of red gram in Maharashtra has demonstrated the power of aggregation of small farmers and the resultant scale of economic activity. If managed well, the FPCs can become a key stakeholder and represent interests of their members, who are mostly small and marginal farmers.

Another important lesson is that the mere announcement of policy interventions such as MSP are unlikely to yield desirable results, especially in terms of last mile outreach. The government needs to collaborate actively with other actors in the citizen space such as the MAHAFPC. Such a collaboration could possibly bring about intended benefits of MSP interventions for small farmers.